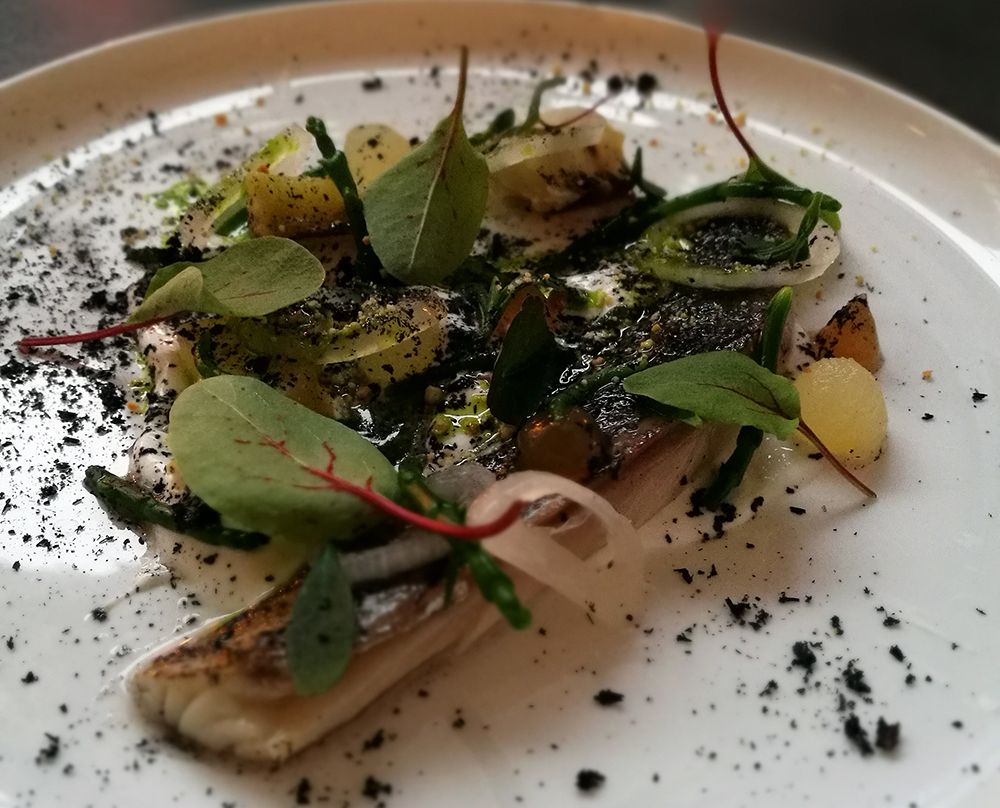 Having broken out of the staid and decorous surrounds of his previous residence at Caxton on Ermine St., Chef of the Year 2014, Handling, has launched The Frog in London’s trendy East End, a stone’s throw from Brick Lane.

A highly decorated and accomplished chef, Handling brings his love of Asian techniques and flavours, most noticeably Japanese, to his new culinary incarnation.

As ever, his beautifully presented dishes are compiled from the best seasonal ingredients in a fusion of creativity and harmonious design and flavour.

The only thing is, this avenue of avant-garde experimentalism he has found himself in, seems to have run off the plate and into the restaurant itself.

Upon arrival one is first struck by the numerous frogs and The Frog logo emblazoned in graffiti across the exterior. Inside there is a Bavarian beer house-styled entrance and seating area, with the wicker furniture and great bunches of hops hanging from the ceiling imparting an almost Alpine ambience – which is immediately dispelled upon walking into the main restaurant where one is greeted by loud electronic ambient music, a much brighter, airier space and walls clad in questionable modern art – it’s a bit like a modern art gallery channelling ‘organic Kent farm’ and held inside a classroom.

The froggy theme runs throughout, with the colour green frequently reoccurring, even in the drinks. Fun Shoreditch-esque themes aside I’d like to know why ‘The Frog’? What’s going on?

Well, The Frog’s website and the chef himself, explain it best:

‘Interiors are motivated by a desire for guests to feel both comfortable and inspired, the restaurant has a mix of industrial-design features combined with eclectic soft furnishings as well as having art by young artists exhibited on the walls.

This nod in the interiors to young creativity is no coincidence, with Adam himself being only 28 and with his strong belief in the importance of providing platforms for young creativity, in any form, to be both showcased and developed.

“We want The Frog to become a showcase for young creatives,” says Adam. “So, we’re going to be working with art students, up and coming DJs, young wine-makers and food producers, and guest chefs to provide an ever-changing canvas for the best of their ideas and experiences”.’

So, there you go.

Multiple messages aside – the food soon dispels any notions of uncertainty. It is clever, extremely well presented, innovative and delicious. The level of cooking is exemplary and The Frog is clearly allowing Adam to showcase his prodigious talent.

The dishes are imagination capturing, Handling is one chef that really excells at taking you on the journey with him, the presentations seeming like some form of culinary evolution is occuring on the plate, with new and strange forms arising from the mist before your very eyes.

The wine list is exciting with new age wines from young winemakers and Old & New world in equal measure. It reads like a pan-European Song Contest with acts from Serbia, Slovenia, Mexico and England putting in an appearance.

Alongside this they have an almighty selection of craft beers from selected micro-breweries and even ‘curated’ cocktails.

All in all, and after becoming accustomed to the discordant design and decoration, I really liked The Frog. Handling always manages to impress and this is no exception – especially at this price point. Just make sure you try the chicken butter.