Ugbrooke Park in south Devon has a rich history and among its Capability Brown designed landscapes lie some of the finest sporting opportunities and hospitality the UK has to offer.

At the helm of Ugbrooke Park is Alexander Clifford, who took over the reigns of this sporting estate after his father recently retired.

“The Clifford family have been living at Ugbrooke since the late 1400s, and it’s stayed in the family, handed down from father to son, with my wife and I taking over about three years ago,” says Alexander. “So, we are personally now into our third successful season on what has always been a shooting estate. But not back in the 1400s obviously!”

Ugbrooke began its evolution to a sporting estate in around the late 1800s, some of the history of which Alexander was fortuitous enough to have unearthed: “It was quite wonderful to be researching the shoot here and rooting around in the attic, when I discovered an old gamebook dating back to 1896,” says Alexander. “In it are recorded the names of all the drives that we still use to this day. It also includes entries for hares, foxes, squirrel and a lot of English partridge.”

However, it was not always feathered game that has been harvested at Ugbrooke, with the estate also serving as a deer park up until the First World War period. “There are no deer encouraged here anymore,” says Alexander, “but at the time the estate was asked by the War Office to grow potatoes and other food for the war effort – food which was subsequently destroyed by the deer, and so the deer were subsequently shot for their venison in lieu of the potatoes.

“Comical historical mishaps aside, the current team we have at the estate have been running things for over 15 years, since back when my father was still in charge, and they’ve just had their best season ever. One fabulous exception to this is our keeper, who has been with us for 54 years and I’m the third Clifford he has worked for – he’s worked for the 13th, 14th and now the 15th Lord Clifford, so we are all very proud of him.”

Alexander himself had the traditional start to shooting life; as a boy only being allowed to carry an unloaded shotgun with him for the first few years and being made to learn the classic safety poem A Father’s Advice by rote. “At the age of 14 I was then finally allowed to share a peg with my father,” says Alexander. “I spent my early years learning to shoot from my father, shoot day etiquette, and was very lucky to visit shoots up and down the country to see how they were run and operated.” 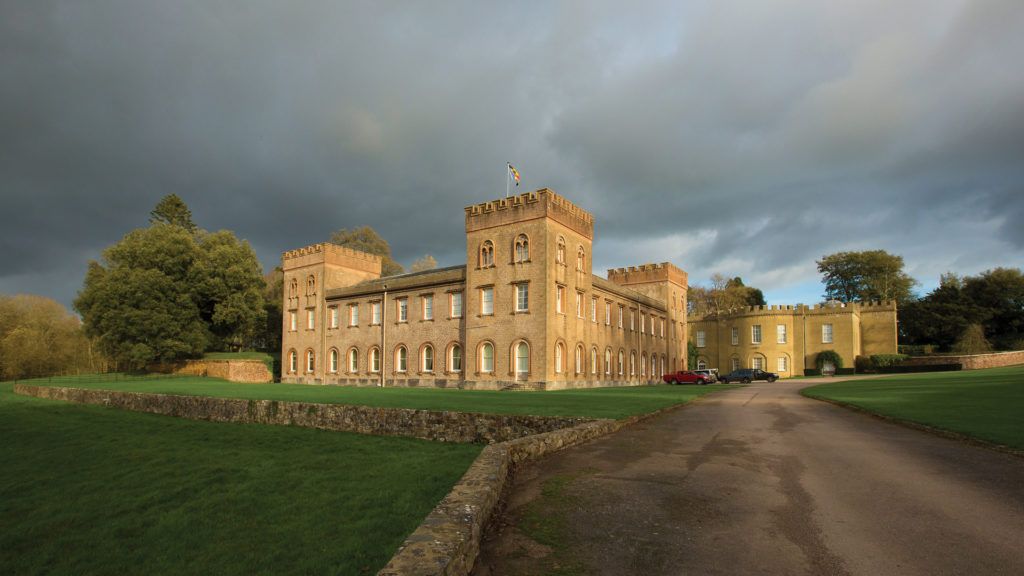 Aside from the knowledgeable Alexander at the helm, Ugbrooke Park has the fortune to be sited among some of the best shooting topography in the UK, and has a landscaping and architectural lineage that makes it truly world class.

“We’re incredibly lucky that Ugbrooke is one of the Capability Brown designed estates,” says Alexander. “The house itself was designed by the Scottish architect Robert Adam and has some fantastic features and interiors, and we take a great sense of pride in these things.

“The landscape is stunning here – it’s almost as if Brown designed it with sport in mind. We held a talk here last year as it was the tercentenary of Capability Brown, and it was said that as most of the estates where he did his work were generally quite flat, he ended up struggling with our estate’s Devonshire hills!”

In four different places, Brown dammed the Ugbrooke, from which the estate takes its name, creating not only a series of fetching lakes and ponds, but also an excellent landscape for sporting opportunities.

“They are simply wonderful for the duck that we have here,” says Alexander. “Instead of just circling around one pond they fly all the way down the valley which makes them extremely sporting targets – fast and high for the Guns.”

Among the wonderful woodlands and areas that Brown planted, there are 300-year-old trees on both sides of the valley that the birds fly across – and as such it’s one of the most stunning shoots one can visit. The landscaping, topography and beautiful countryside lend themselves to the shoot perfectly, which is all topped off by the house itself, not only a family home, but the heart of any good shoot day.

“My job here as custodian is to not only look after the landscape but also the house itself,” says Alexander. “We keep it running, looking smart and make it perfect for our guests, adding sensitive subtle modern touches, while maintaining the history of the Robert Adam rooms, throughout the property.

“We offer the traditional country house party shooting experience so everything has to be at that much higher level of service for our guests. We host dinner parties in the evening, sometimes black tie, but it’s my wife who brings a massively professional approach to the proceedings and generally makes me look good!”

The shoot itself is not run on a large commercial scale and aims for quality over quantity, hosting visiting teams of guns from the world over, with around 60% coming from abroad and 40% being domestic clients. “We are a boutique shoot and limit it to about 30 shoot days per year,” says Alexander. “We aren’t a big commercial interest and all our guests are hosted by myself and my wife and they stay in our home. Most of our clients are high net worth individuals and we really like to go the extra mile to add that personal touch for them.”