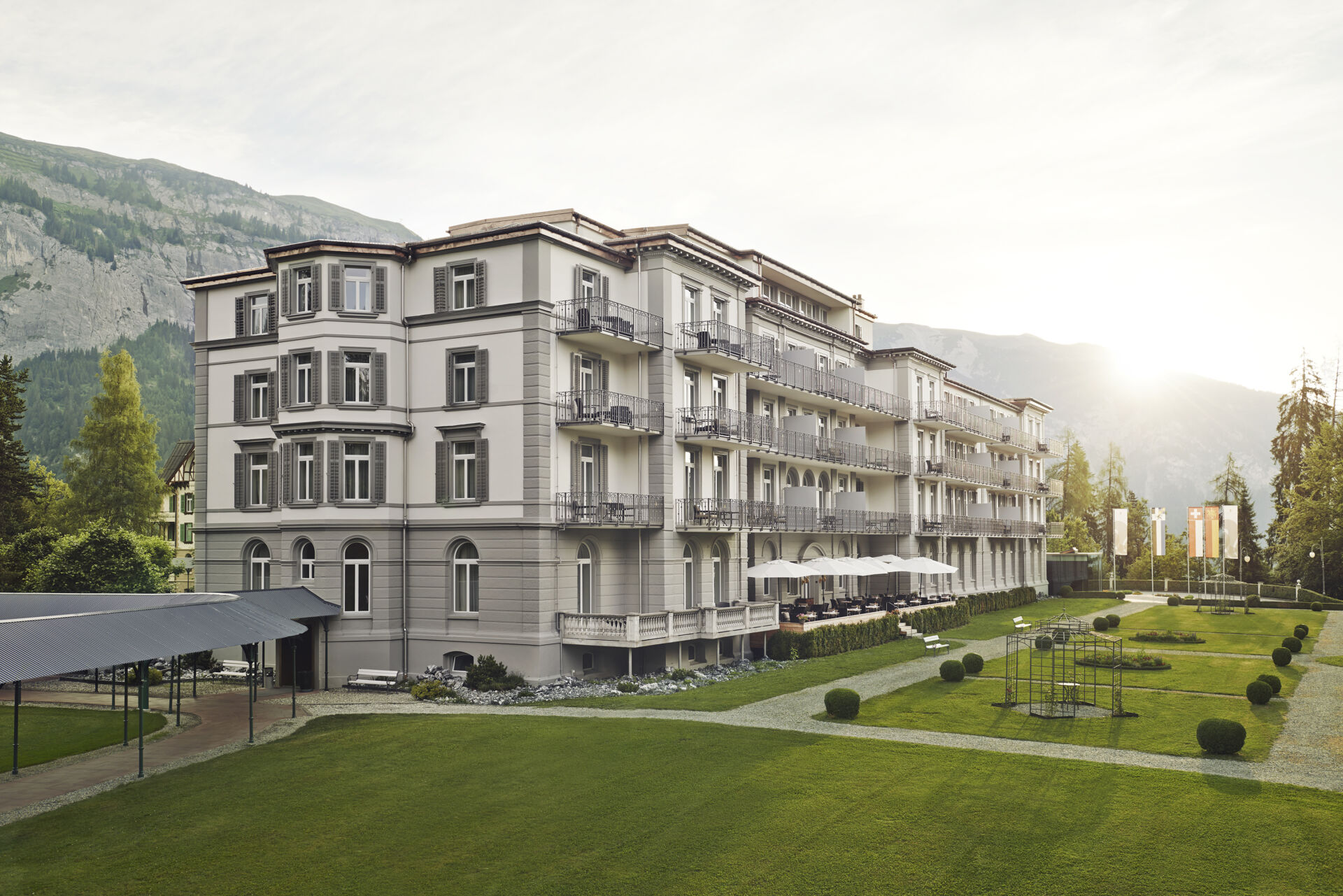 James Lawrence experiences a luxury break in the iconic ski resort of Flims, without going near a piste.

To visit Flims without the intention of skiing, may initially seem as perverse as booking into a luxury suite and then pitching up a tent in the hotel’s garden. But then Switzerland’s best kept secret has long offered visitors a plethora of diversions: mountain hiking, superlative gastronomy and rest and relaxation for starters. There’s also the undeniable allure of the village itself; Flims is one of those rare Alpine resorts that hasn’t been overdeveloped and the whole atmosphere is one of tranquility and tradition. Traditional Swiss chalets line the main street and most of the hotels are tucked away discreetly – this is the antithesis of a bling, party-orientated ski resort.

Which is fortunate, as partying was the last thing on my mind. I was lured to this winter tourism paradise instead by the promise of spending two nights at the legendary Waldhaus Flims, fresh from a recent £32million renovation. Arranged between three buildings: the Grand Hotel, turreted Villa Silvana and discrete Chalet Belmont – all connected by underground passages and covered walkways – the Waldhaus is the very epitome of a luxurious hotel.

Indeed, only the most jaded of travellers could fail to be impressed by the Waldhaus. Glistening chandeliers, delicate light installations and stylised motifs set the scene for a hotel that effortlessly combines state-of-the-art amenities with an unrivaled historical pedigree. Moreover, the location is simply perfect – situated in a private park, the rooms overlook the dramatic Tschingelhörner summit through an Apline forest. An apology for the cliché, but no adjective really does the vista justice. It’s something you have to appreciate first-hand.

But first things first – the logistics of getting to Flims. Unlike St.Moritz, or the equally glamorous Gstaad, Flims does not require an arduous four hour journey from Zurich; our chauffeur whisked us from Zurich airport to the Waldhaus in under 2 hours. The downside, however, of Flims’s proximity to a major airport is that the resort is relatively low – it’s at about 1,100 meters – and lacks the grandeur of Zermatt’s Matterhorn for example. But this is a minor quibble when compared to the resort’s considerable charm and lack of crowds; Flims mainly attracts German and Swiss families, and never approaches the horror of Chamonix in high season.

After check-in, we postponed exploring the hotel for an afternoon hiking across the forest – the hotel staff will gladly suggest routes, which wind across the valley floor, taking in the beautiful Tschingelhörner’s snow-capped peaks. Alternatively, a regular shuttle transfers guests to the nearby ski station, where the mountain cableway will take the adventurous to the highest point on the glacier. After our hike, we changed and dined at the delightful Pomodoro restaurant near the lift station, which serves Italian dishes in a convivial atmosphere.

The following morning afforded more time to get acquainted with the Waldhaus. Founded in the 19th century and completely refurbished in 2016, the hotel has long been one of Flims’ grandest addresses, a byword for unsurpassed luxury and glamour in Switzerland. Which is quite an achievement considering that there is a glut of top-end accommodation in this small nation. What set it apart was not so much the amenities – all 5-star hotels have spas and top-flight restaurants, etc – but the service, which went that extra mile and was unfailingly exemplary throughout.

However, visitors expecting to book a small, standard double room at a discount price will leave disappointed – the Waldhaus doesn’t trifle with such things, instead it offers 142 rooms and suites which start at the deluxe category and go up from there. My deluxe Junior Suite was eclectically adorned with both classic Swiss furniture and more modern pieces, offset by a vibrant color scheme and plenty of rich fabrics and wood pieces, not to mention my own balcony. As you’d expect, our room was a very generous size, but nothing compared to the hotel’s pride and joy, the Presidential Suite. Boasting the title of Flims’ largest suite, it offers 250 square metres of unparalleled luxury and comfort, including those all important views of the forest. Even a five minute glimpse was enough to make us swoon – If only.

Thankfully, you don’t have to fork out for the top suite to enjoy the panoply of perks that the Waldhaus offers, such as a superbly well equipped gym, several restaurants and Summit Bar. The hotels’ public spaces are also suitably grandiose, complete with high ceilings and no more than a whisper from its inhabitants. Indeed, they lent the Waldhaus a distinctly Agatha Christie air.

READ >>
Viva Cruises Return to the Water in Germany

Its crowning achievement is undoubtedly, though, the plush spa set across a series of stone and perspex cubes, with the sizeable indoor pool contained in an unobtrusive glass structure. I spent most of the afternoon enjoying its decadence; like the hotel’s choice bedrooms, the lavishly equipped spa enjoys spellbinding views of the forest and mountain scenery. No complaints either with the impressive list of amenities on offer: single-sex and mixed saunas, steam bath, gym, Jacuzzi, treatment rooms and salt grotto. But the star attraction is the open-air heated pool, where I spent many hours lazing on bubbling waterbeds gazing at snow-capped peaks.

A brisk hike around the forest got me in the mood for the evening’s gastronomic feast, presided over by Executive chef Patrick Hetz. His culinary artistry reaches its apogee at Epoca, the hotel’s signature fine dining restaurant. Surrounded by glass, Epoca’s choice tables enjoy captivating views of the surrounding grounds, made all the more magical by the falling snow during our meal. His cooking is no less impressive: a modern take on regional recipes is Hetz’s mantra. The meal invoked fond memories of Switzerland’s finest Michelin-starred venues: precise, Italian influenced cooking that managed to be both creative but not over-wrought. Scallops with chervil foam, pumpkin Gnocchi and saddle of venison were all exquisite.

The wine offering was similarly impressive, glass after glass of moreish Pinot Noir from Switzerland’s Valais region. And the service? We were looked after by an army of professional, courteous staff, clearly trained with Teutonic precision bar none.

A sophisticated cut above the rest indeed.

Getting there: Swiss Air offers daily flights from London Heathrow to Zurich.

Note: I travelled to London Heathrow via Reading, with Great Western Railway

(Single are available from under £35 each way.)

Waldhaus Flims offers nightly rates from CHF 660 (approx. £499) in winter, based on two sharing a Superior Double Room in the Grand Hotel on a B&B basis.