View To A Thrill

Mürren is home to some of the best skiing in the Alps, but its beauty shines all-year-round.

The small town of Mürren, high in the Bernese Oberland region of Switzerland, is hidden away among the snowy peaks of a region rich in history, stretching back through its Bronze and Ice Age settlers, up to its most modern, the peoples from the Lötschen valley in the Valais, who’s isolated legacy is still evidenced today by the pronunciation of the Mürren local dialect, which is markedly different to that of the neighbouring regions.

The car-free village of Mürren lies on a series of rocky mountain terraces over 5,400ft up, high above the floor of the glacier-carved Lauterbrunnen valley, the often-vertical faces of which are traversed via large, gently swaying cable cars on a mesmeric journey past tumbling waterfalls, soaring kestrels and snow-capped trees lining rocky outcrops. Continue further at the next station on this, the longest aerial cableway in the Alps, and you will eventually reach the dizzying heights of the Schilthorn at 9,744ft. The air up here is thinner and the rich greenery of the valleys and terraces below gives way to snow, ice and steep, slate-grey rocky outcrops – in fact just the kind of place where a villain might hide his lair… 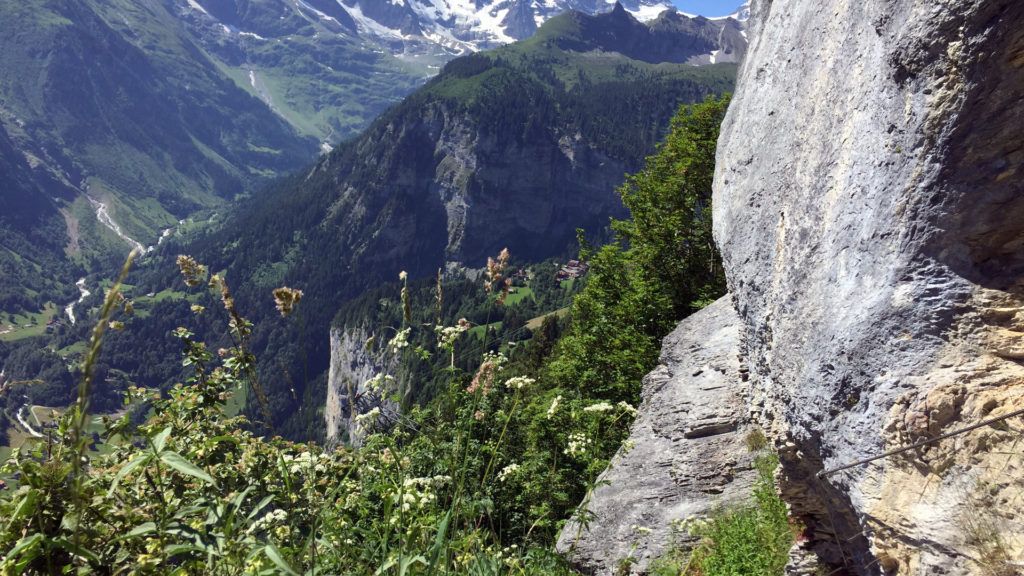 It was nearing the end of the 1960s when the makers of the James Bond film On Her Majesty’s Secret Service discovered, and helped to finance the final construction of the Schilthorn’s famous revolving restaurant, Piz Gloria (schilthorn.ch). They knew at once it was the perfect location for the film’s scenes involving Blofeld’s hideout and spent the next five months filming and living, in and around Mürren.

During a meal at Piz Gloria diners will experience the full 360° panorama which takes in the famous Alpine trio of the Eiger, Mönch and Jungfrau peaks, with views on a clear-day reaching all the way across to Mont Blanc.

Alongside the famous restaurant, James Bond Walk of Fame and Bond World, the latest free-of-charge attraction to the Schilthorn is the Thrill Walk. Located at the midway cable-car station of Birg, around 8800ft above sea level and about 3400ft above the village of Mürren, this walkway clings to the side of the cliff over an 820ft void. Its several sections of see-through walkway and rope-bridge provide a ‘comfortable’ test of nerve for those who might be lacking a head for heights. 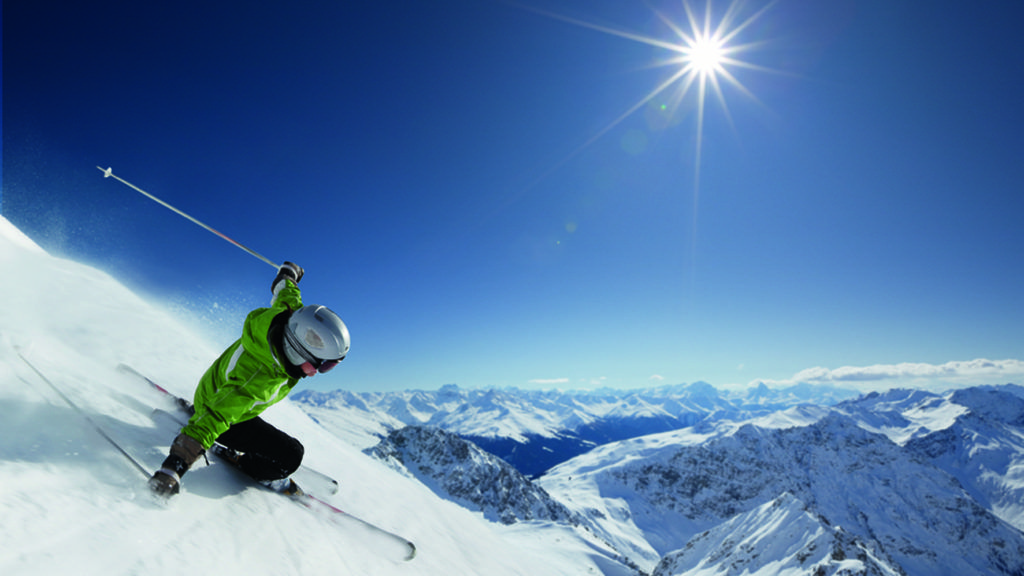 The Cradle Of Skiing

Schilthorn is the highest-altitude ski region in the Bernese Oberland and offers a demanding slope down to the village of Mürren before continuing on to Lauterbrunnen further below. Aside from its famous Hollywood connections, Mürren is known as the ‘cradle of skiing’ and is one of the most famous and historic skiing resorts in the Swiss Alps, with the mid-station of Birg being the centre of the skiing area for all abilities and also an ideal starting point for hikers.

In 1928, Mürren held the first of its famous ‘Inferno’ races. At just under ten miles long and descending over 6500ft, the Inferno is the longest amateur downhill race in the world and attracts around 1800 amateur racers every January from across the globe.

Mürren was brought to prominence as a winter sports resort for British skiers by early tour operator, Sir Henry Lunn. During World War I the resort was used as an internment centre for injured British prisoners of war, some of whom Henry’s son, Sir Arnold (who was knighted for ‘services to British Skiing and Anglo-Swiss relations’ in 1952), introduced to skiing as a form of recuperation.

Sir Arnold Lunn organised the first modern slalom at Mürren in 1922, the first World Championships of Alpine skiing in 1931, and raced in the very first Inferno. Arnold’s son, Peter Lunn, captained the British team at the 1936 Winter Olympics and skied throughout his life in Mürren, competing in the Inferno at age 90, back in 2005. 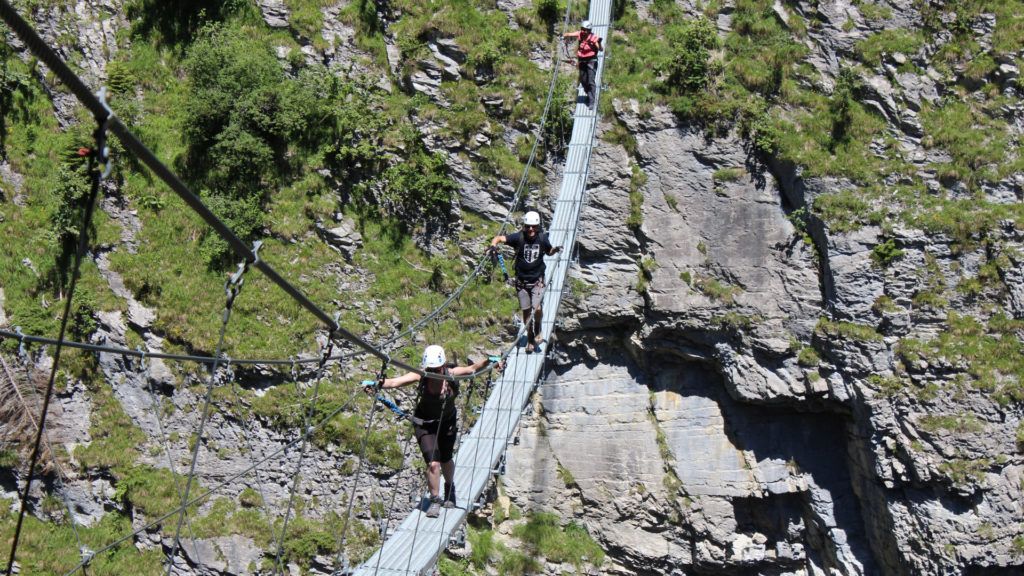 In the summer season the mountains and valleys surrounding Mürren offer the active holidaymaker a plethora of activities, suitable for all levels of fitness – and fear!

First on the list of any low-impact adrenaline junkie should be the new via ferrata, which begins in Mürren and heads out high above the Lauterbrunnen Valley and down into Gimmlewald. Via ferrata translates from its native Italian as ‘iron road’ or ‘iron way’ and is a mountain route lined with cables, embedded metal steps and even some ladders, to facilitate the traversing of terrain that would otherwise be inaccessible to the average person. Each climber is equipped with a climbing harness and two carabiner hooks which attach to the cable along the route.

Via ferratas were first developed around World War I as a method of moving non-mountain trained combat troops through the Dolomites. The Mürren via ferrata takes around three hours to complete and covers 1.5 miles with a vertical descent/climb height of over 1300ft.

At one point there is a narrow 262ft ‘Nepal’ bridge to walk across and also one must engage in 197ft of funambulism (the art of tightrope walking). Although you are secured to lines, some head for heights is required as the route of the via ferrata leads you out and on to the cliff face at numerous points.

Now, you are connected by a safety harness, but stepping out on to tiny metal rungs, standing over thin air – above a 3280ft vertical drop to the valley floor below – really gets the blood pumping.

Yet, despite navigating this, you will still feel put to shame as you reach one of the many ‘launch pads’ along the route. Here you may be lucky enough to witness firsthand the preparations of base-jumpers, as they don their wingsuits, shuffle to the edge of the platforms and tip themselves forward into the abyss, before gliding down into the valley below. Not for the faint hearted! 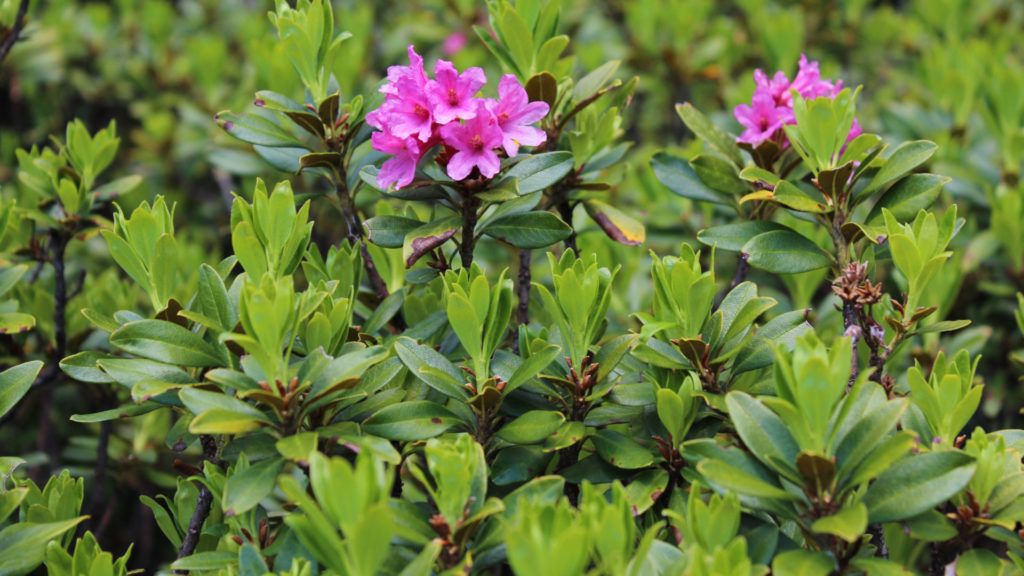 Another must-do activity in the region is to undertake a mountain-view hike along the trails along the western edges of Mürren – climbing up and into the Valley of Flowers.

Although tiresomely cliché, ‘breathtaking’ is an accurate adjective to use at this point. Although short, the hiked ascents are invigorating in the clear air and the views make any level of exertion worth it. Clear, blue skies and bright sunshine lends the sweeping emerald and lime green valleys – punctuated by swathes of flowers, orchids and roses – an ethereal quality. It simply looks unreal.

Suitable for hikers of all ages and abilities these upper-valley trails offer some of the most beautifully contrasting vistas one can imagine. Different species of flowers around every turn, carpets of alpen rose (rhododendron ferrugineum), streams, waterfalls and the distant soundtrack of the iconic sound of Alpine cow bells, makes this an experience not to be missed. 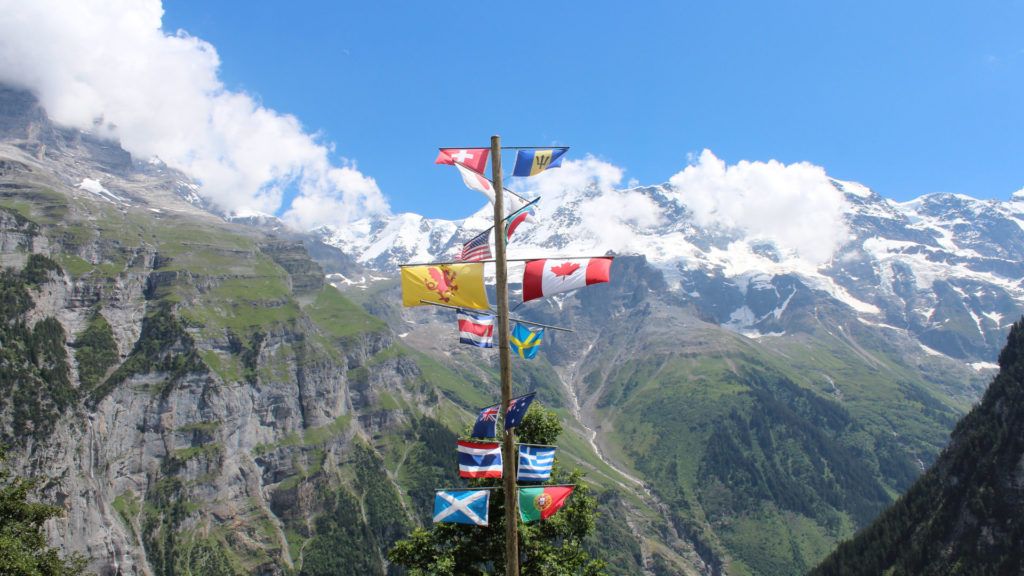 After the multiple sensory overloads and working up an appetite, Mürren offers all you need to recharge the physical and mental batteries, and to unwind in style. For those with a penchant for discernably fine dining, the Hotel Alpenruh features an embracing and traditionally styled dining room, with excellent service and a modern Michelin star rated kitchen.

The Eiger Hotel also offers quality food and accommodation; its popular apres-ski Tächi Bar can be lively in high season but the rooms are luxurious and it offers some stunning poolside views across the Lauterbrunnen valley.

A short walk down the road is The Eiger Guest House, which offers hearty traditional Swiss sustenance and live bands and other events throughout the year.

Savvy travellers to the region will also want to take advantage of the Mürren Guest Card, which is free of charge and entitles the holder to myriad discounts and free entry to attractions such as the sauna and spa in Mürren’s modern sports centre and all-organic café.

– History: Mürren, the ‘Dorf auf der Mauer’ (Village on the Wall) was first documented in 1257

How To Get There

To organise travel, activities and accommodation in Mürren or the Jungfrau Region of Switzerland contact Mürren Tourism and for detailed information about Schilthorn Cableway Ltd., the Thrill Walk, Bond World and the 007 Walk of Fame, visit here.

To plan your flights and rail transfers from the UK to Mürren see My Switzerland.