V Is For Victory

Made famous during the Battle of Trafalgar, the HMS Victory is often regarded as Britain’s greatest warship, says Peter Goodwin.

When she was launched in 1765, the 104-gun HMS Victory was the ultimate warship design of the Georgian era. Many years later, as Admiral Lord Nelson’s flagship at the Battle of Trafalgar in 1805, she became inextricably linked to the memory of Britain’s greatest naval hero.

Her formidable firepower of 104 guns mounted on three full gun decks meant the Victory was among the most powerful weapon systems afloat – the 21st century equivalent of an aircraft carrier or a nuclear-powered intercontinental ballistic missile submarine.

Born into the pre-industrial age, the Victory was wholly reliant on the sweat and toil of her 800-man crew and the wind in her sails to bring her to life. She was an organic structure, built almost entirely of wood and other natural materials, and it took timber from some 6,000 oak and elm trees alone to build her hull.

Victory was planned and built in the 18th century with an intended life expectancy of no more than eighteen years, so the fact that she survives today, almost 250 years later, is remarkable. Ongoing programs of conservation and restoration will ensure her longer-term survival. 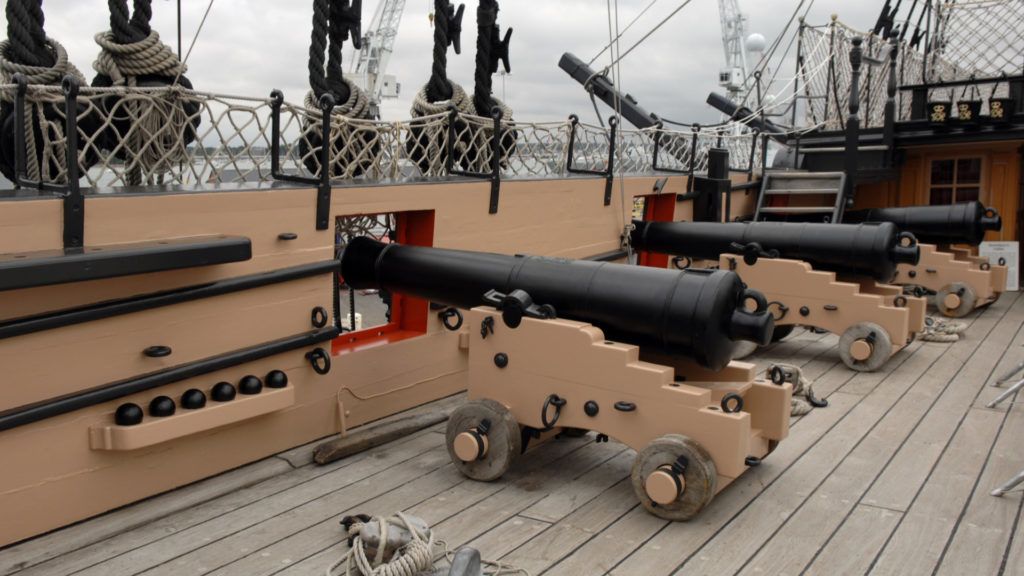 By March 1801 the French Revolutionary War that had raged for eight years had financially exhausted Britain, France and Spain. In order to destroy Napoleon’s Northern League against Britain, a fleet under Admiral Sir Hyde Parker, with Rear Admiral Lord Horatio Nelson as second-in-command, sailed to break the Dano-Norwegian alliance. The resultant Battle of Copenhagen ensued on 2nd April. It was during this hard-fought action that Nelson ‘turned a blind eye’ to Parker’s signal to withdraw and negotiated a truce with the Crown Prince. This battle thwarted Napoleon’s ambitions and the new Government led by Henry Addington negotiated peace with France, the treaty of which was signed on 27th March, 1802, and thus ended the French Revolutionary Wars. However, the peace was fragile and short-lived.

In 1799 HMS Victory, 32 years old and somewhat battle worn, had been retired and was languishing at Chatham Dockyard. Deemed unworthy of economical repair she was awaiting her fate when a sudden reprieve saw her brought back to life. The loss of the first rate 98-gun Impregnable on 8th October, 1799, created an urgent need to retain a first rate ship in the Channel Fleet in a time of war. Consequently, the Victory was given a new lease of life and was taken in hand at Chatham, where a survey revealed that she was ‘in want of a middling repair’ at an estimated cost of £23,000. When the repairs were finally completed and Victory was undocked on 11th April, 1803, her ‘great repair’ had cost a total of £70,933 – an overrun of 66% more than the original estimate.

To reduce weight on her old hull and improve firing rate, her heavy 42-pounder guns were replaced with lighter and more manageable 32-pounders, with an extra two placed at the new gun ports. The six 18-pounder carronades previously mounted on the poop deck were removed, although the lightly boarded bulwarks remained. Recommissioned under her new commander Captain Samuel Sutton on 9th April, the Victory sailed for Portsmouth on 14th May.

Just two days later hostilities against France reopened with immediate threat of invasion by Napoleon Bonaparte. Nelson was appointed as Commander-in-Chief Mediterranean Fleet. The Victory had provisionally been appointed as flagship for Admiral Cornwallis, commanding the Channel Fleet already blockading the French fleet in Brest. Despite this, Nelson, now a vice admiral, hoisted his flag in the Victory on 18th May.

When Sutton reached the Mediterranean Fleet off Cape Sicie, Nelson, taking Hardy with him as his Flag Captain, transferred his flag into the Victory on 31st July, while Sutton, as ordered, took command of the Amphion. From this point Nelson, Hardy and the Victory become historically synonymous. 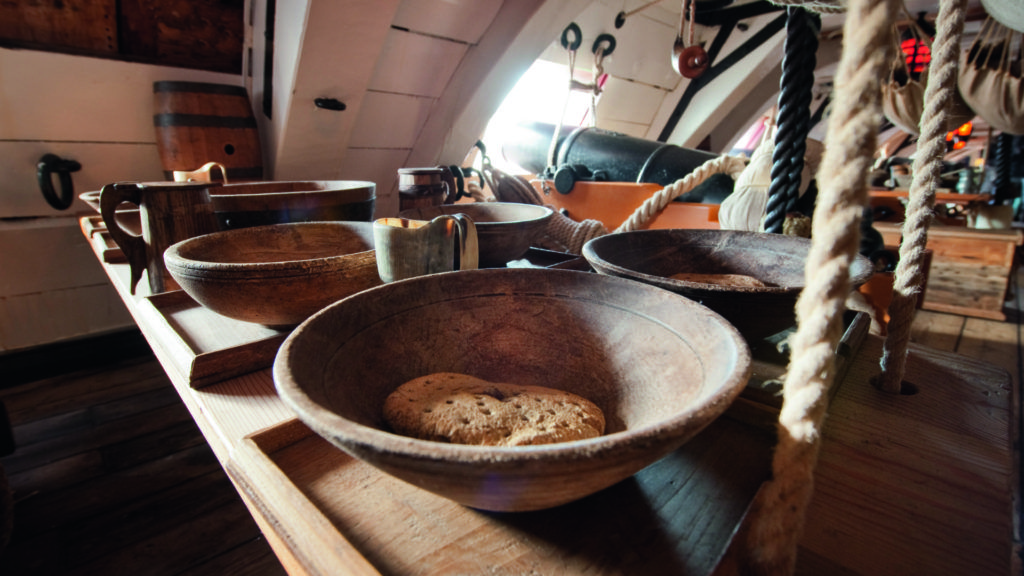 For the next eighteen months the Victory remained on station blockading the French in Toulon and periodically refitting at the anchorage in Agincourt Sound, Corsica. It was while here on 18th May, 1805, that two frigates, Nelson’s ‘eyes of the fleet’, suddenly appeared signalling that the French fleet, commanded by Admiral Pierre Villeneuve, had escaped out of Toulon. The Victory immediately weighed anchor and the ‘great chase’ began, leading Nelson’s squadron eastward to Alexandria. Not finding the French there, Nelson sailed west and into the Atlantic and back, passing through the Strait of Gibraltar on 4th May. As part of the invasion plan, Napoleon sent Villeneuve to the West Indies as a ruse to draw off the British fleet defending the English Channel, and to enable Napoleon to land his invasion troops prepared at Calais and Boulogne.

Nelson, in the Victory, followed in hot pursuit across the Atlantic and back, finally running Villeneuve to ground at the Spanish port of Cádiz. Nelson left his long-term colleague Admiral Cuthbert Collingwood to blockade what was now a combined Franco-Spanish fleet. Nelson, much exhausted, sailed for Portsmouth in the Victory, arriving there on 18 August. After a brief rest at Merton, Nelson sailed from Portsmouth on 15 September and rejoined Collingwood off Cádiz on 28 September, celebrating his own 47th birthday on arrival.

Following a succession of plans thwarted by the overall stranglehold of blockade by various naval squadrons as well as Nelson, Napoleon had already abandoned the invasion of Britain in July of 1805. Faced with a new coalition between Britain, Austria, Russia and Sweden (and shortly afterwards Prussia), Napoleon ordered his troops to march east to open a new theatre of war against the Austrians and this alliance. To this end, Napoleon ordered Villeneuve to sail with the Combined Fleet into the Mediterranean and Italy to provide naval support to this campaign. On 18 October Nelson’s watching frigates signalled that the enemy were weighing anchor to make good their escape and sailed to enter the Mediterranean through the Strait of Gibraltar. Unable to shake off the pursuing British fleet, Villeneuve turned back to Cádiz and inevitable battle. The Battle of Trafalgar

At daybreak off Cape Trafalgar on Monday 21 October 1805 the British fleet formed into two lines, one led by Nelson in the Victory, the other by Collingwood in the 100-gun Royal Sovereign, and sailed at right angles towards the enemy line. Battle commenced around 11:45am with Collingwood breaching the rear of the Combined Fleet. Shortly after, the Victory, driving into the van of the fleet, fired a devastating broadside into the stern of Villeneuve’s 80-gun flagship Bucentaure. Next she went alongside and engaged the 74-gun Rédoutable, commanded by the very able and tenacious Captain Jean Jacques Lucas. At about 1:15pm, when the fighting between the two ships was at its fiercest, Nelson was fatally shot by a French marksman and carried below, where he died of his wound at about 4:30pm. As he lay dying, the Franco-Spanish fleet was routed and the Royal Navy won its most glorious victory: 17 ships were captured and one, the French 74-gun Achille, blew up at about 5:30pm.

A tremendous storm followed the battle, during which many of the captured ships were lost and much damaged. The Victory, with her mizzen mast and topmasts shot away, was finally towed by the 98-gun Neptune into Rosio Bay, Gibraltar, on 28 October. Having made good her repairs and fitted jury masts, the ship sailed for Britain on 28 November carrying the body of the fallen hero Nelson. She arrived at Portsmouth on 4 December where she has remained standing stoically to this day.