The plan was simple: buy a Trek 920 and then cycle from Vancouver to Dawson City via Jasper and Whitehorse. It would be a minimum of 2,000 miles, but I had four months to do it in, which seemed like plenty of time, even for a 50-year-old like me.

Scouting the 920 in a UK-based Trek dealer, the sales assistant told me that the bike I really needed was the 1120, the 920’s delinquent, functioning-alcoholic step-brother. Are you sure?, I asked. Oh yes, came the confident reply. Definitely.

While the Trek 920 is a fairly conventional drop-handlebar touring bike, the 1120 is an aggressive, aluminium-and-carbon fat bike with three-inch wide tyres, custom front and rear luggage racks, and a riding position that almost everyone says is too aggressive for extended road use.

It looks bad-ass, though. 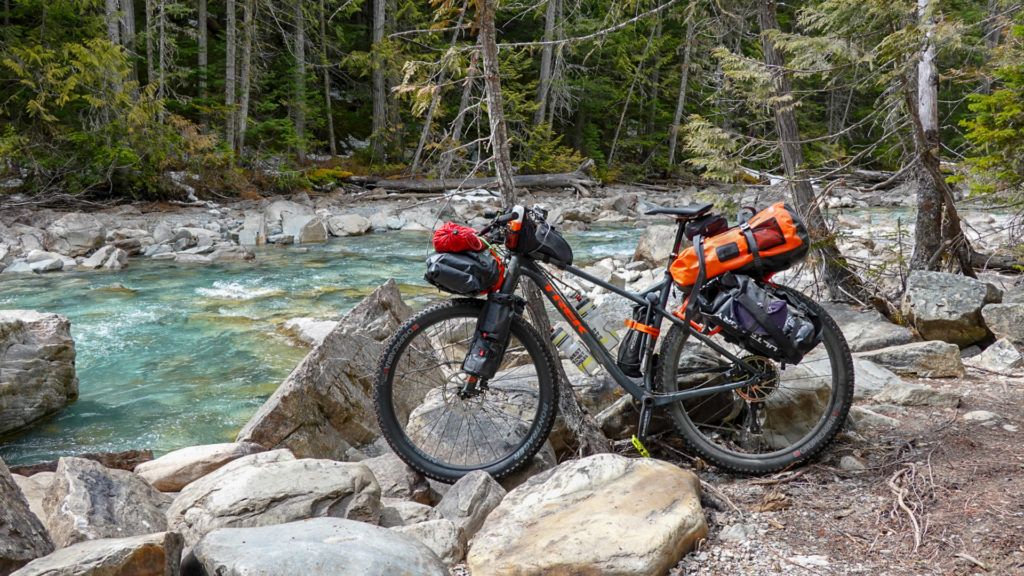 So, I bought a Trek 1120 from West Point Cycles in Vancouver (they were not the guys who advised me that I needed an 1120 rather than a 920). West Point Cycles did a tremendous job of setting it up, advising me on the spare parts I should take, and generally giving me the sort of confidence boost I needed.

A Snow Peak titanium mug, 900ml pan, and a spoon made up my cooking kit, along with a 17g titanium burner head and two small gas canisters. This little lot was held in a Salsa Anything Cradle and dry bag mounted on the left-hand front fork, while the other side held my washkit, again in a Salsa cradle. 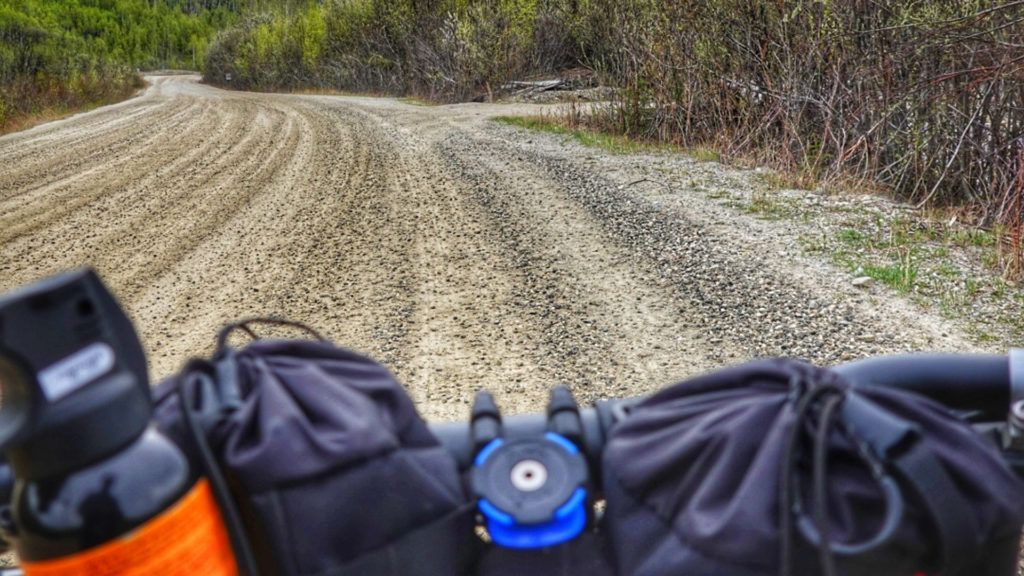 Two handlebar bags held my toilet kit and my sunscreen, bear spray, and solar powerbank. A top-tube bag held bits and bobs like a passport, while a QuadLock phone mount held my phone, which was the only navigation I used bar a tiny roadmap. This might sound irresponsible, but there are only a few roads in this part of Canada and directions like ‘turn left and stay on the road for 500 miles’ were commonplace…

A small seat-mounted bag held a collection of bike tools, and my clothing was stored in a 10-litre dry bag on the offside of my bike. The nearside bag – again, 10-litres in size; the Trek website says that eight-litre bags must be used, but I found that slightly bigger ones fitted just fine – held food: up to six days’ worth would be needed for the Stewart-Cassier Highway, and two water bottles held half-a-days water. A Katadyn Pocket water filter meant that I could make drinking water from even the foulest of ponds and puddles.

The front cradle held my Montane Prism synthetic sleeping bag, my NeoAir XLite sleeping pad, and my Hilleberg Enan tent. The Trek 1120 weighs about 15kgs (so not that light…), and my camping kit weighed another 15-ish, although the food and water would bump this up significantly on the longer stretches.

READ >>
A Matter of the Heart

The trouble was I needed to be able to work along the way, which meant taking a GoPro rucksack with a laptop, charger, mouse, camera, GoPro, leads, and all the other stuff that a mini-office requires. This added another 15kgs or so, which meant that the bike, fully loaded with food and water, weighed in the region of 50kgs+. 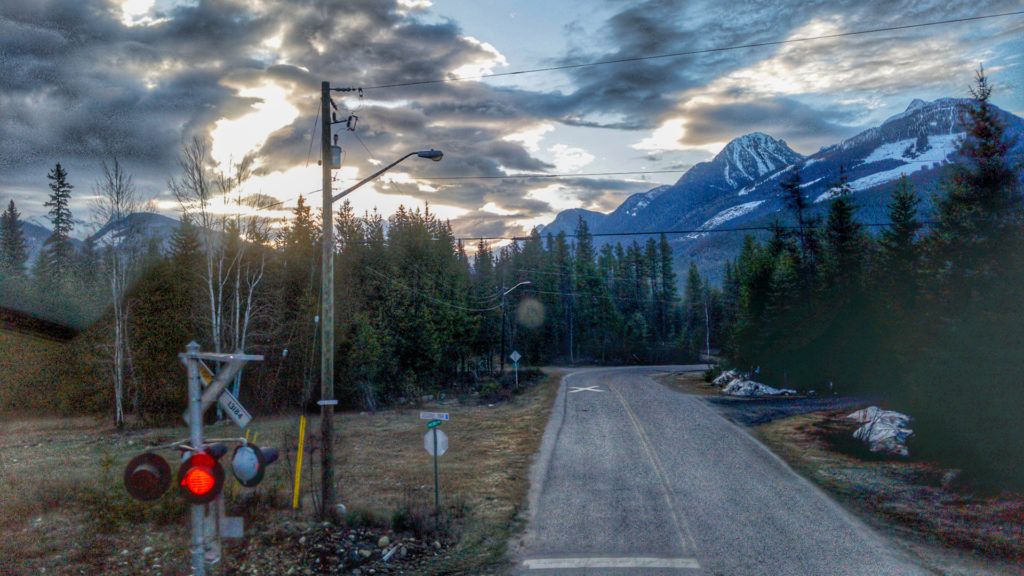 This is too much. I lifted it, just, onto the train in Vancouver but it was hard going.

However, it was worth it because the VIA train from Vancouver to Jasper might take almost 24 hours, but it only costs $150 for a seat (shared cabins go for $1,000 and more, but aren’t necessary given the huge legroom on offer), which makes it one of the great Canadian bargains. We saw black and grizzly bears, moose, elk and possibly a coyote. Throw in some of the nicest, most friendly staff in the business, and my cycling holiday started with a bang.

It went downhill from there.

I managed 58 miles on my first day, even if the final five-or-so saw me pushing the bike uphill through mud and snow to get me to the most spectacular camping spot of the trip at Kinney Lake. The water was an incredible turquoise blue, and the snow-topped mountains and lakeside forests meant that my first experience of wild camping in Canada is one I’ll never forget. A bear even came calling in the night, but I was too sleepy to do anything other than to tell him to bugger off; tiredness makes heroes of us all, eh?

The second day saw me cover 55 miles, and then just under 60 on my third. At which point I freewheeled four miles downhill and flagged down another VIA train into Prince George[1] and abandoned my bikepacking holiday in favour of a rented Ford F150 pickup and day-trip rides only.

It’s not just that the Trek 1120 isn’t a good long-distance bikepacking bike. (Although it isn’t.) Nor is it that the saddle is too hard and the riding position too aggressive. (Although both are true and hugely problematic; my left hand is still tingling after three days of supporting an awful lot of my body weight.) Nor is it that the bike weighed too much even sans luggage. (Although it does.) Nor was my fitness an issue. (Although I could have been fitter, the training effect of long days in the saddle meant I was getting stronger even in the three days I was cycling.) 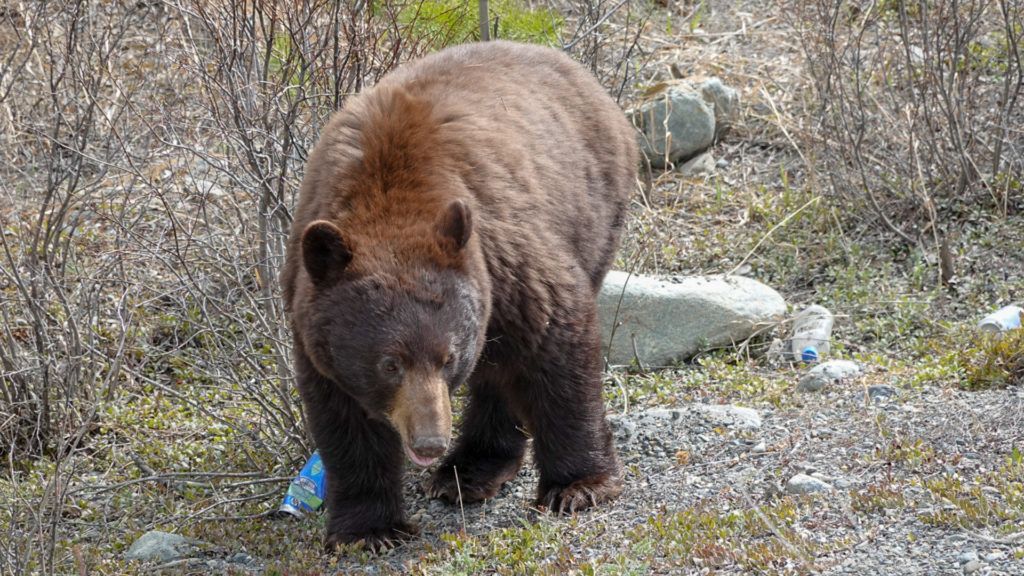 No, the main problem was that damned work bag. The extra 15kgs really held me back, even on modest downhill stretches where I still needed to pedal to maintain forward motion. Without it I’m sure the 1120 would have been an okay bike; not as good as the 920, for sure. But okay.

Because it has some good points. The 11-speed, single front-chainwheel gearing is fine. Sure, I spun out on the downhill sections but the lowest gear was low enough that balance, rather than gearing, became the issue on long, steep uphill sections. Everywhere else I could spin and spin and spin, which any long-distance cyclist will tell you is the key to making good progress.

Those funky front and rear panniers work too, even though I’m not sure they offered any advantages over a more conventional set-up. But, the bend in the handlebars means the grips are too low, and the dropper seat-post seemed like a bit of a waste of weight and money to me. Oh, and the handlebar grips themselves are horrible, being hard and unyielding and unworthy of a bike that costs £2,400. Without pedals…

The Salsa Anything Cradles were excellent, and the perfect size for what I wanted them for. Ditto, the handlebar bags, which made quick loo stops easy, and kept my bear spray to hand. (Not that I needed it; the bears, with the exception of the first night, kept their distance.) The navigation via ViewRanger was excellent too, and was easily comprehensive enough for pan-Canadian travel. I kept a log of my routes, and these show average speed, height gained and lost, plus the ability to retrace my route backwards should I have become lost.

I also carried a McMurdo FastFind 220 personal locator beacon. At £220 it was, for me anyway, cheap insurance; I knew that if anything serious happened to me from a bear attack through to serious illness or a road traffic accident, I could press a button and help would arrive, albeit later rather than sooner given the remoteness of the areas I was travelling in. Highly recommended and a must-have if you are travelling in remote areas, in my opinion. The battery life is five years, so it’s less than a pound a week, which seems cheap to me.

So, the learning from the trip is a) stick to your guns and not let a Trek dealer talk you into spending hundreds of pounds more on a less suitable bike, and b) don’t take a mobile office bikepacking with you. 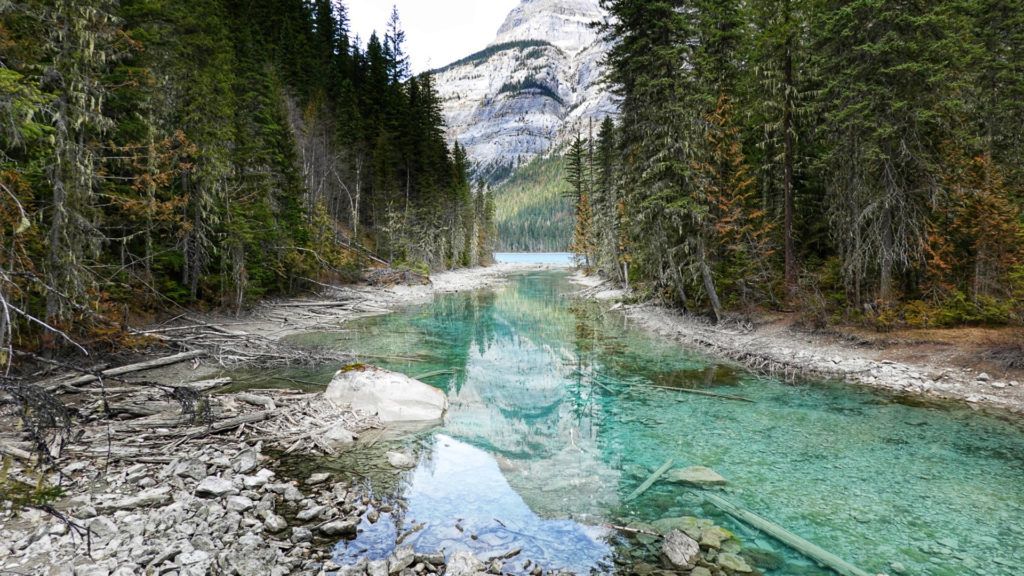 I’ve since used the 1120 on rough side roads and unmade trails all over Canada and can confirm that it makes a fine day-touring bike.

But still probably not a better one than the Trek 920. Or even the Surly Long Haul Trucker…

[1] Flagging down rural trains is acceptable. Expected, even. And the staff on this one were so friendly I ended up going out for beer and nachos with them.