Carlton Boyce spends a week with a £70,000 VW California campervan, and channels his inner Wallace and Grommet.

I’m a bit of a Johnny-come-lately by the standards of most motoring journalists. Now celebrating my tenth year of reviewing and writing about cars, even I sometimes feel a little jaded. Yes, I know that having a new car to drive every week – fully fuelled, taxed, and insured to boot – is a very privileged position, but trying to find something positive to write about the latest diesel-powered Euro-box can be a bit of a challenge sometimes.

And then something comes along that shakes your complacency and even forces you to re-evaluate your whole week. (You thought I was going to say life, didn’t you?)

The Volkswagen California is one such vehicle. With me for a week, I decided to pack it up and disappear into the Welsh countryside for a week to see if I could get into the whole #vanlife groove. 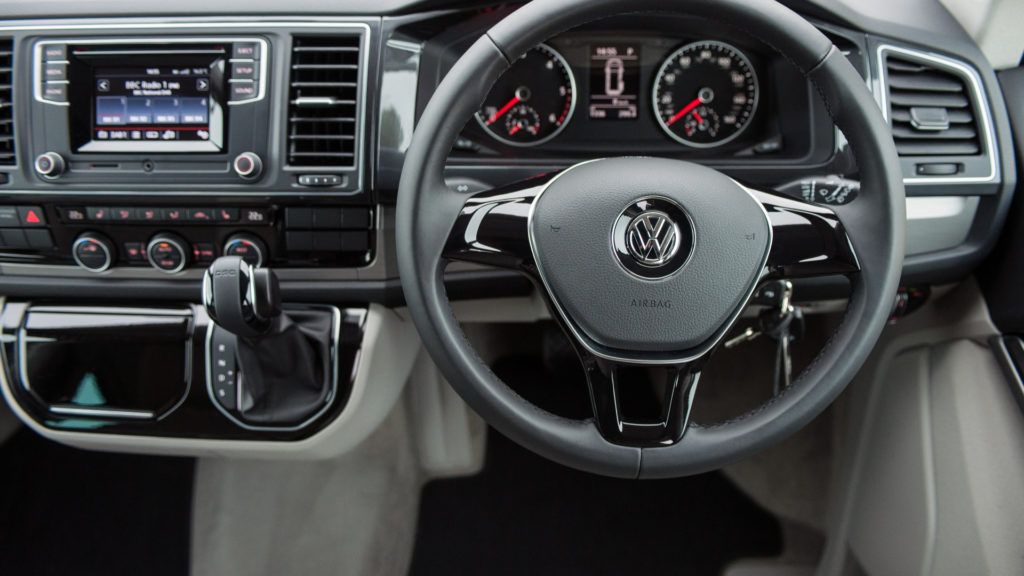 First impressions are good. It’s officially Bamboo Garden Green Metallic, but looks blue in some lights. Retro but modern, it’s as if VW had crossed my old Helios Blue Golf GTI with my even older Lhasa Green. Subtle and high-end, it blended in perfectly with the Llyn Peninsula crowd.

Nicely fitted out, too. It sleeps four – two in the roof, and two on the sliding-and-folding rock ‘n’ roll bed – and even has a small fridge, a two-ring gas cooker, and a small sink. Blinds all round too, and swivelling captain’s seats. No rattles, either.

Over-light steering (possibly the lightest I can remember) allied to a seven-speed DSG gearbox and almost 200bhp from the turbo-diesel engine could make for a skittish drive but the reality is that it drives very well. Not exactly car-like, but most certainly not like any van I remember driving, bar the excellent Toyota PROACE.

Cruising at motorway speeds is easy, and the twin-armrests make it comfortable, too. I averaged almost 35mpg across the whole week, so it’s fairly easy on the pocket, at least to run. 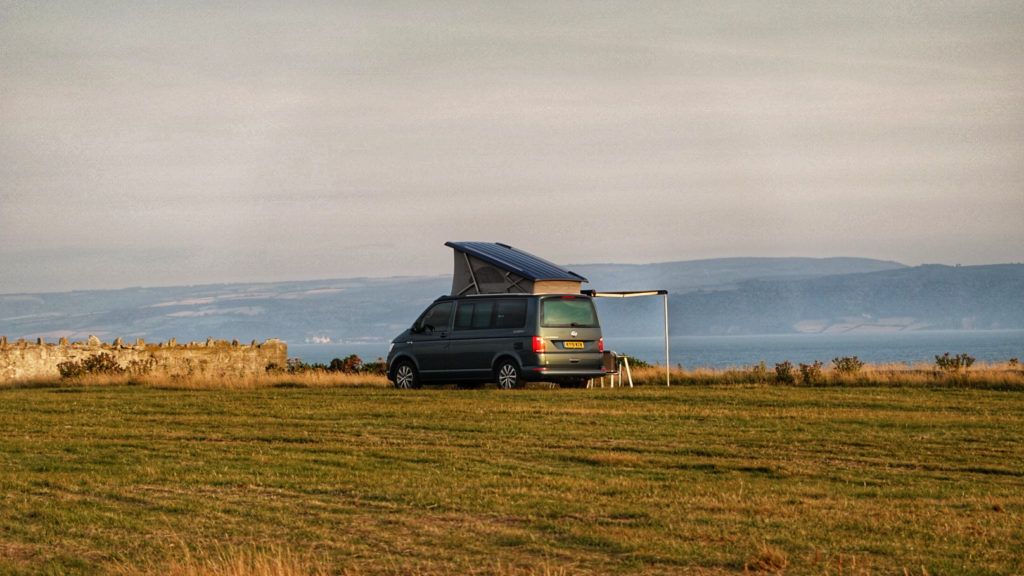 I arrive at my first campsite and, I kid you not, I’m sipping beer within five minutes. The roof elevates and retracts at the touch of a button; all that’s left to do is to sling two pillows and a couple of sleeping bags up there and the bed is sorted.

A table sits inside the sliding door, and that’s unlatched and open within seconds. Two folding chairs are stored inside the rear door, and they’re similarly easy to set up. All that’s left to do then is to open the awning, lift the lid off the fridge and grab a couple of ice-cold beers, and I’m sitting and watching the sun go down over the coast and starting to understand why people buy these things.

It’s clever, you see, and beautifully thought out. You’ve read already that neither the table or the chairs take up any appreciable room in the cabin because they’re stowed away in what would ordinarily be wasted space. They’re robust, too and comfortable. They click in and out of their home with ease – and they don’t rattle, even when you’re threading your way along a pot-holed access road.

The window blinds are all hidden away inside what looks at first glance to be normal window trim. (All except the ones for the driver’s and passenger’s side windows, which are fabric and stowed under the rear seat.) The one above the fridge was so well-integrated that I had to resort to reading the handbook to find it, and you all know how I hate doing that.

The fridge is controlled by the master-panel in the roof, between the front seats. The same panel operates the roof and the auxiliary diesel-powered hot air heating system too. The latter is set-and-forget convenient when the wind and rain start, which they’re apt to do in Wales in the summer.

The rear seat slides fore and aft; fore to increase boot space and to allow it to fold flat into a double bed, and aft to make more living space. The fold-out table slides on runners, and can be positioned so that even I can sit comfortably at it for eight hours at a stretch whilst working on my laptop.

READ >>
Outlaws: Raise the Exhilaration Content of the Universe

There are lights everywhere, too. Plus a separate electrical system with its own battery that meant I didn’t need to worry about my laptop or the fridge running down the main battery. It all just works. And while I’m sure that some aftermarket conversions are cheaper and do the job almost as well, I doubt that they would do it as well. Or be as rattle-free. Or look so neat and integrated. Or so sturdy and easy to operate. 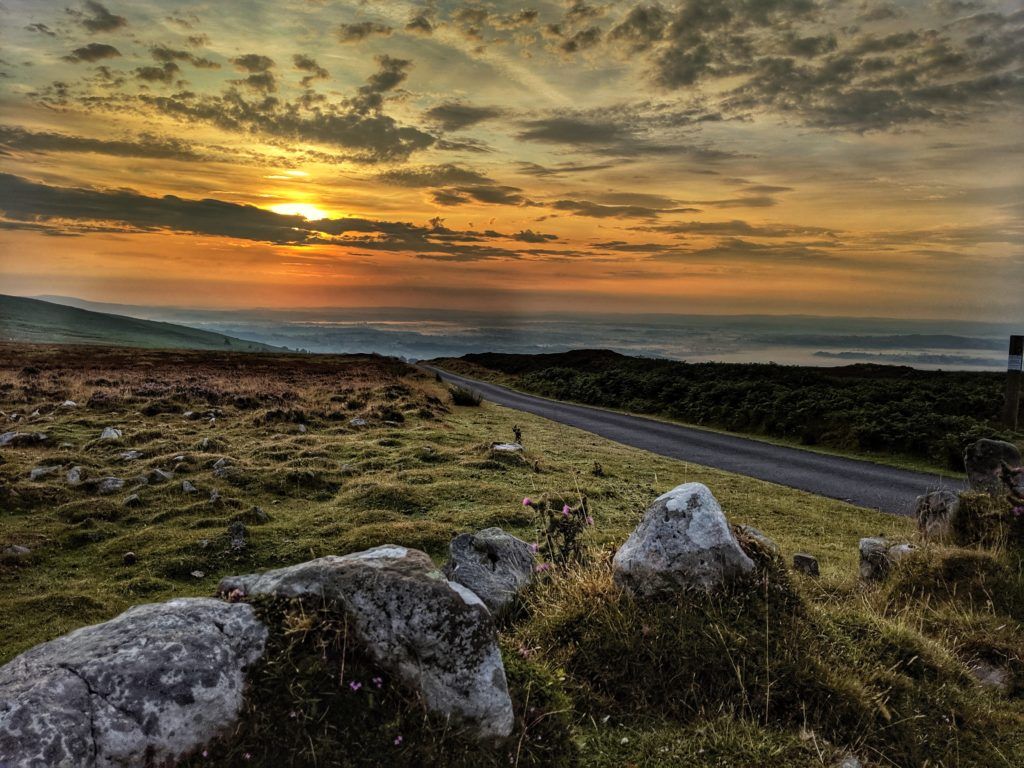 And the joy of waking up to views like this cannot be over-stated. Nor can the ability to work anywhere, stop and make a coffee when you fancy one, or even sleep overnight in the wild knowing you are almost self-sufficient. I say almost, because I missed a loo and a shower, but every campervan and caravan is a compromise, and the payoff here is a vehicle that is small enough to be able to park in a normal-sized parking space, which means it’ll double-up as the family run-around in the week.

Of course, the Volkswagen California isn’t perfect. At 6’ 3” I was just a shade too tall to be able to lie flat out on the upper bed without my pillows falling through the access hole  – and if I lay with my head at the rear of the vehicle, the headroom was almost too tight for me to be able to comfortably read my Kindle.

And the access hatch that sits above the front seats isn’t the most convenient or elegant way to climb into bed but, and this is a biggie, it does mean that you can slide into your trousers a la Wallace and Grommet in the morning if you leave them on the headrest of the passenger’s seat. That never got old.

And campervans are meant to be fun, right?