Celebrate National Tweed Day with a Boozy Brew (How British!)

With Wednesday 3rd April being #NationalTweedDay, we were delighted to receive a bottle of Noveltea’s The Tale of Oolong. Launched in April 2017, The Tale of Oolong is a blend of cold-brewed oolong tea, jasmine tea, rose petals, papaya and mango flakes and a slug of Scotch whisky. Despite some initial reservations, we found the combination of cold tea and whisky worked very well. Just as well, in fact, as a decent malt sipped in front of a peat fire – while wearing a fine Harris tweed, obviously…

The ten-hour cold-brewing process is said to eliminate any bitter tannins, and while we can’t claim to be tea-brewing experts, the Tale of Oolong is very smooth indeed, with an impressive balance of fruity sweetness and smoky tea, undercut by the tang of Scottish whisky.

We tried it served cold with ice, as well as gently warmed; while we enjoyed it as a refreshing (and not overly alcoholic) hot toddy, we felt it worked best as a cold drink. We’ve previously thought of whisky as something to be drunk in the autumn and winter to warm us up after a day in the hills, but a couple of iced The Tale of Oolongs on a warm spring evening convinced us of whisky’s potential as a cooling and refreshing drink in hot weather, too.

At just 11% alcohol, its strength is more on a par with wine than a spirit, which means it can be drunk neat without knocking yourself out after a couple of glasses. Also, while we didn’t try it, we imagine it would slide down very well when diluted with soda water and plenty of ice as a long drink. 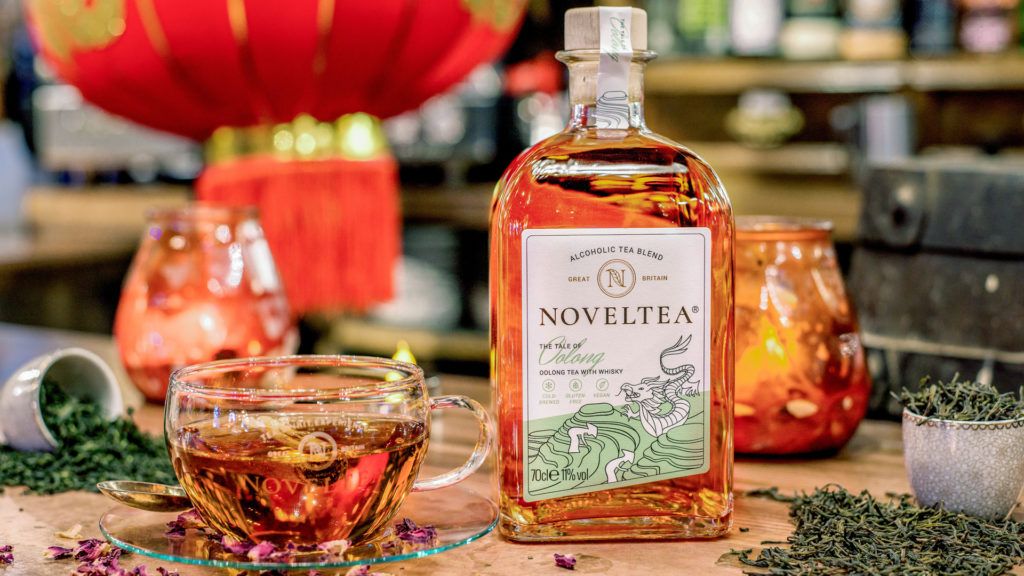 The brainchild of tweed-wearing Vincent Efferoth and Lukas Passia (‘German by birth and Geordies by choice’), the venture appeared on Dragon’s Den in November 2018, receiving three investment offers: Tej Lalvani proposed £80,000 for a 40% stake, Jenny Campbell also came in with an £80,000 bid for 40%, while Touker Suleyman undercut the pair with an £80,000 offer for 39%.

Having tasted the chaps’ alcoholic tea, the only surprise is that no-one has thought to do it before as it works brilliantly; we predict a rush of similar brands to the market but, for now, Noveltea has the off-licence shelf to itself.

In honour of National Tweed Day, Noveltea is collaborating with vintage and heritage menswear studio Mr Munro to offer the chance to win a 3-piece tweed suit and 70cl bottle of Noveltea, but rather than wait to see if you’ve won, why not pop out and buy yourself a bottle?

If you’re not a whisky drinker then you can choose from an Earl Grey tea, juniper and British gin mix (The Tale of Earl Grey) or The Tale of Tangier, an infusion of Moroccan green mint tea with sp­­earmint, dried lemongrass, dried apple, blackberry leaves and Caribbean rum.

For further details on the competition to win a tweed suit and a bottle of booze please visit Noveltea’s social media channels on Twitter, Instagram and Facebook.