An Introduction to Shooting Grouse

The allure of shooting the fastest gamebird in Britain is as high as ever and Britain’s red grouse provide some of the most exciting sport a game shot can have, says Gordon Robinson of the Royal Berkshire Sporting Agency.

“The red grouse, or just simply ‘grouse’, as they are generally called par excellence, is the shooter’s delight, and affords more sport than all the other birds of Great Britain put together,” according to Dr John Henry Walsh, in his 1856 book “The Pursuit of Wild Animals for Sport”. Known as “The Sport of Kings”, driven grouse is the epitome of Britishness and shooting. And with these diminutive brown birds zipping along the contours of the moors at speeds up to 80 miles an hour, who could disagree?

Driven grouse shooting didn’t really take off until the mid-1800s, when shotguns with hinged breeches were introduced, followed shortly afterwards by cartridges containing primer, propellant and projectile, allowing for “rapid” firing. Until then, grouse shooting was confined to shooting over dogs, “walking-up” the birds, or “stalking” them. Dr Walsh describes the latter: “Stalking is practiced by the shooter himself, by means of the telescope, and is a very laborious pursuit, compared with the outlay of time and labor, especially if these are increased by the weight of the game-bag.” By the end of the 19th century, driven grouse was becoming ever more popular, and during Queen Victoria’s reign, a passion for visiting Scotland for sporting holidays developed, further increasing the lure of the grouse moors.

And so, with the extraordinary rise in grouse fever, the opening day of the season, 12 August, became known as The Glorious Twelfth. It’s eagerly anticipated today, too, with shooters knowing this marks the beginning of the game season. It isn’t only shooters who look forward to this date, however. Chefs from London restaurants join the Guns in travelling up to the moors. As soon as the first drives are over, they then race back down to the capital on planes, trains, vehicles and helicopters, plucking grouse as they go, in order to ensure this delicate meat can be enjoyed on the evening of the Twelfth. 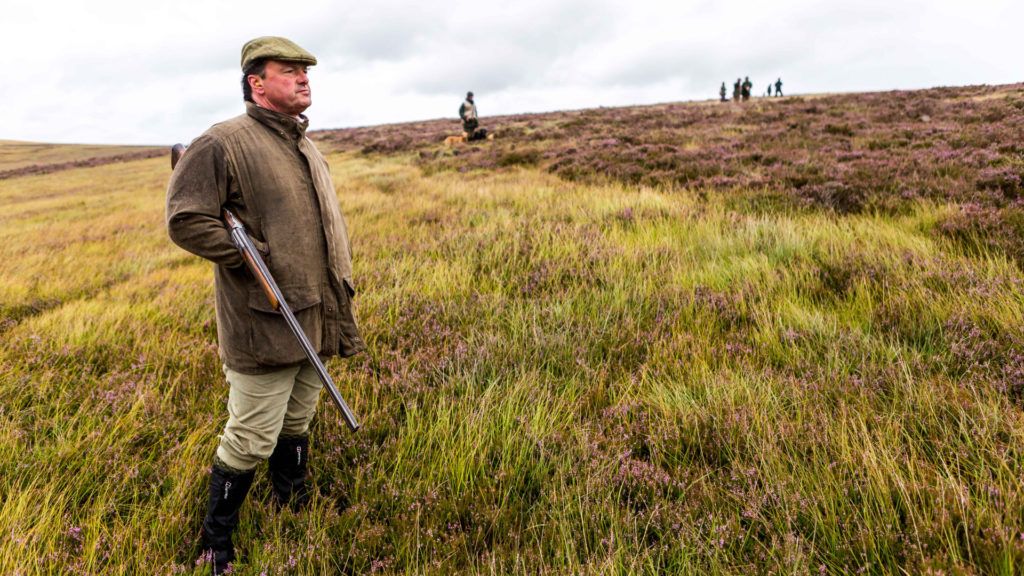 So what can you expect on a driven grouse day? In every instance, the gamekeeper, shoot captain or host will give a safety briefing. Driven grouse shooting is the most potentially dangerous form of bird shooting there is – Guns shoot birds that are driven forward, so in the direction of the approaching beaters’ line, but then also turn around and shoot birds behind as they pass the line of butts – so “swinging through the line” can be a cause of possible accidents. With the briefing over, you’ll be taken to the first drive, or beat, and shown to your numbered butt. If it is a double gun day, you will be accompanied by a loader, who will have brought your gun, your cartridges and the crucial butt sticks. The latter you will position on either side of your butt, taking into account your neighbours, so that you cannot swing your shotgun through the line of Guns.

The beaters will have been dropped some considerable distance away, and will be working the moor. It can take some time for the first coveys to appear – the grouse will often drop back down a few hundred yards from where they were first disturbed. Once the coveys do start flying, be ready – they’ll be hugging the contours of the moorland, and zooming towards you like fighter jets. As mentioned, with grouse shooting you’ll be shooting the birds as they come towards you, but then, once the covey has passed, you’ll lift your barrels, turn around, and shoot the birds as they depart, too. It requires concentration, speed, agility and quick thinking to be successful, as this is simply the fastest-paced wild bird shooting you’ll ever see.

READ >>
All About Binoculars 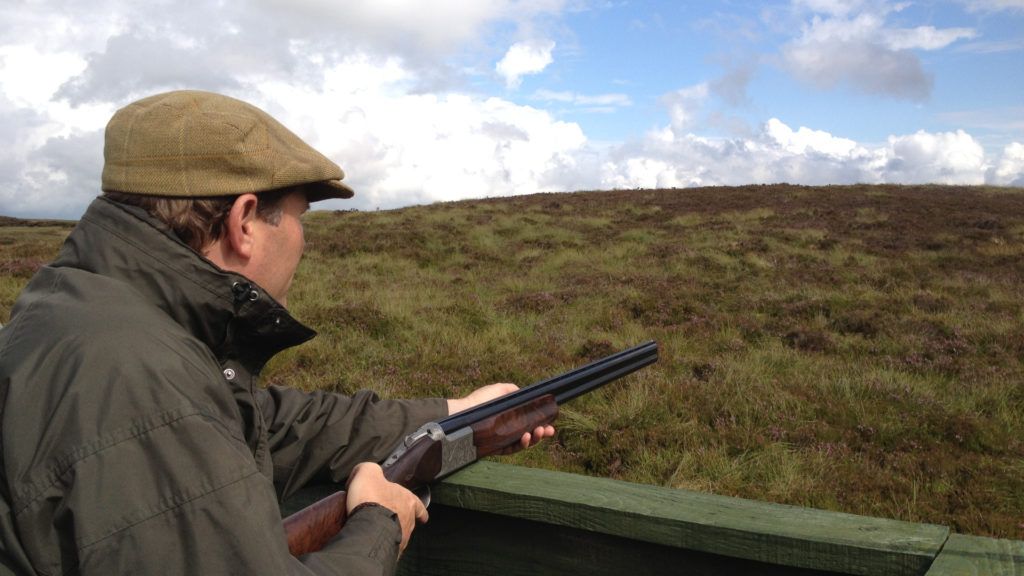 Guns have markers in their butts, so that the Gun or the loader can ensure that a bird down isn’t lost, though in the heat of the action this can be tricky. If a bird is pricked and runs, it must be left until the end of the drive – it’s simply too dangerous to pick it up during. Rest assured, though, there’ll be an army of pickers-up to send in their gundogs to find every last one!

Only found in the British Isles, the red grouse (Lagopus lagopus scoticus) get its name from its characteristic red brow, and its reddish brown plumage. Unlike its cousins, the willow grouse and ptarmigan, there is no change in plumage during the winter, though it does share the trait of having feathered feet, an adaptation to deal with cold climates.

Grouse rely on young heather for their food, consuming up to 50g a day – which is why their habitat is almost exclusively moorland. The largest populations are in northern England and Scotland, where moorland is managed specifically to benefit the birds. Heather is burned, in order to encourage its regeneration, providing the young shoots the birds eat.

Grouse start to form pairs in the Autumn, with between six and nine eggs being laid in the spring. Incubation lasts around 25 days, and the chicks are fully grown after around 35 days, though they are capable of flight after just two weeks. Red grouse are a short lived species, two out of every three birds will die within their first year, regardless of shooting. The main dangers are disease and predators, though weather can be a large factor – if the hatching season is cold and wet, chicks have a far lower chance of survival. 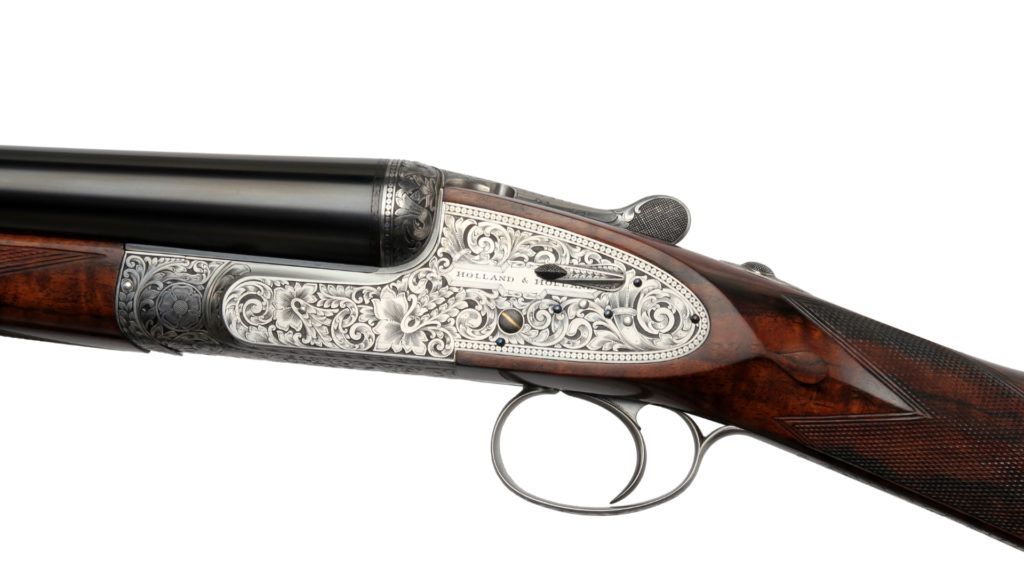 Traditionally, a side-by-side shotgun is used for driven shooting in the UK, however an increasing number of people have switched to an over-and-under. For clothing, a shooting suit made of tweed, in dull colors so as to blend in with the moorland, is the most appropriate. On driven days, you will be expected to wear a shirt and a tie. Take a waterproof jacket, too, as our British weather is notoriously unpredictable. Safety glasses are a must on the moors, as are ear defenders and you’ll need some safety sticks. Plenty of cartridges – you don’t want to run out – but the shoot will be able to advise you on how many to bring. When the season starts, use a lighter load – say 28g of no 7s, but later in the season, when the birds are wilier, wilder and faster, I’d recommend 30g of no. 5s. A shooting seat is a good idea, too, as you may be waiting for a while at the beginning of each drive.

Butts: these are the dug-outs that the Guns (shooters) stand in. Traditionally made of stone, with heather and moss on the edge.

Loaders: for driven grouse shooting, you will be assigned a loader, who will reload your gun for you, as well as making you aware of the approach of birds.

Beaters: the team that will be driving the birds towards the Guns

Flankers and Stops: part of the beating team whose job it is to try to turn birds back towards the line of Guns when they attempt to fly to one side or other of the line. They may carry flags. If they’re waving them, watch out, as birds will be on their way!

Plus-fours, Plus-sixes: the traditional breeks (trousers) that are worn on the moors – the ‘plus-four’ part indicates how many extra inches of cloth there are above the knee.

Beat: large grouse moors are divided into different ‘beats’ or areas. Often each of these will have its own beatkeeper, while the entire moor will be overseen by a headkeeper.

Grit: trays of grit are left out for the grouse to eat (like most birds, they need some sort of grit to break down the food in their crops). This also serves as a method of medicating grouse against diseases/parasites that they are prone to. These grit trays are closed well before the season starts in order to ensure that the meat from the birds is not affected by the medication.

Brace: grouse are counted in brace (two birds make up a brace).

Right-and-left: shooting a bird with each barrel, without taking the gun from your shoulder.

Pickers-up: the gundog handlers, who will send their dogs in to pick up the birds once the drive has finished.

Pricked: a bird that is hit, but not dead

Runner: a bird that has been hit, and is running

Safety sticks: these are sticks placed on either side of your butt. As you will be shooting birds coming towards the butt, but also flying away, safety sticks are placed to prevent you from shooting a neighboring Gun.

Covey/brood: a family of grouse

Pack: later in the year, the grouse form larger groups, known as packs

Grouse butt marker: this is to allow the Gun or loader to mark where grouse have dropped

Where to shoot grouse

The Royal Berkshire Sporting Agency organises grouse shooting from the Highlands of Scotland to the Derby Peak District, with some of the most productive moors being in County Durham and Yorkshire. Many of these stunning estates have private lodges where Guns can enjoy the luxury of five-star accommodation. For more information, visit www.rbss.co.uk.