The Avro Vulcan is an enduring image of the Cold War era, but it first saw action in the Falklands Conflict.

For many years the RAF’s delta-wing jet bombers were the cornerstone of Britain’s nuclear deterrent, ready at a moment’s notice to fly deep into the Soviet Union carrying Blue Steel thermonuclear weapons, in what many crews regarded as one-way missions.

Luckily it never came to this and it was only in its twilight years the Vulcan finally went into action. During the 1982 Falklands Conflict it became clear that diplomacy alone would not resolve the crisis with Argentina. A plan was hatched to attack the airfield at Port Stanley on East Falkland in the early hours of May 1st using a pair of RAF Vulcan bombers dispatched from Ascension Island in the mid-Atlantic.

It was intended for one Vulcan to fly the mission, with the other to serve as an airborne reserve in case the primary aircraft went unserviceable. To support the attack there was no less than eleven Handley Page Victor aerial refuelling tanker aircraft, including two airborne reserves.

On the day of the mission, during climb-out from Ascension’s Wideawake airfield, the cabin of the primary bombing Vulcan failed to pressurise and one Victor tanker was unable to reel out its refuelling hose. Both aircraft had to abort the mission. 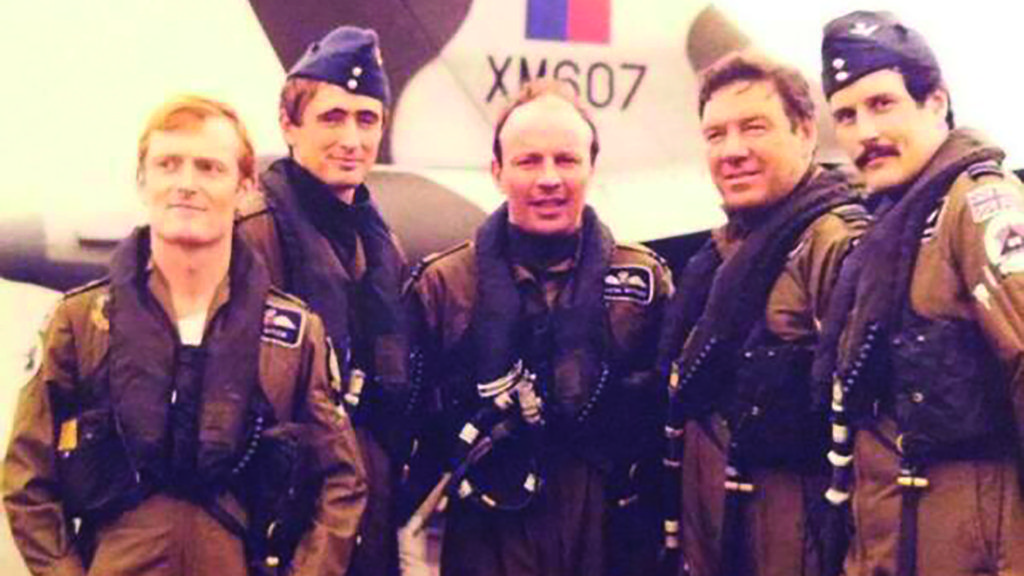 Flight Lieutenant Martin Withers was captain of the reserve Vulcan. When he heard that the primary bomber was forced to abort the mission, there was a pregnant silence on the intercom. Then Withers piped up: ‘Looks like we’ve got a job of work, fellas…’ No further discussion was necessary, for the reserve crew had briefed for the mission as assiduously as those now forced to abandon it.

About 840 miles south of Ascension, the first part of the complex fuel transfer began. The operation could be likened to a huge relay race, but instead of batons the aircraft passed thousands of gallons of aviation kerosene between each other. Four Victors passed all their spare fuel to four others and then turned back for Ascension. Another Victor then topped up the Vulcan’s fuel tanks.

The Vulcan and the Victors flew in loose formation at 30,000ft, the optimum cruising altitude for the tankers. That was 10,000ft lower than the optimum altitude of the Vulcan, which meant the latter consumed fuel at a slightly higher rate than planned. The resultant shortfall could come only from the reserves carried by the individual Victor tankers. 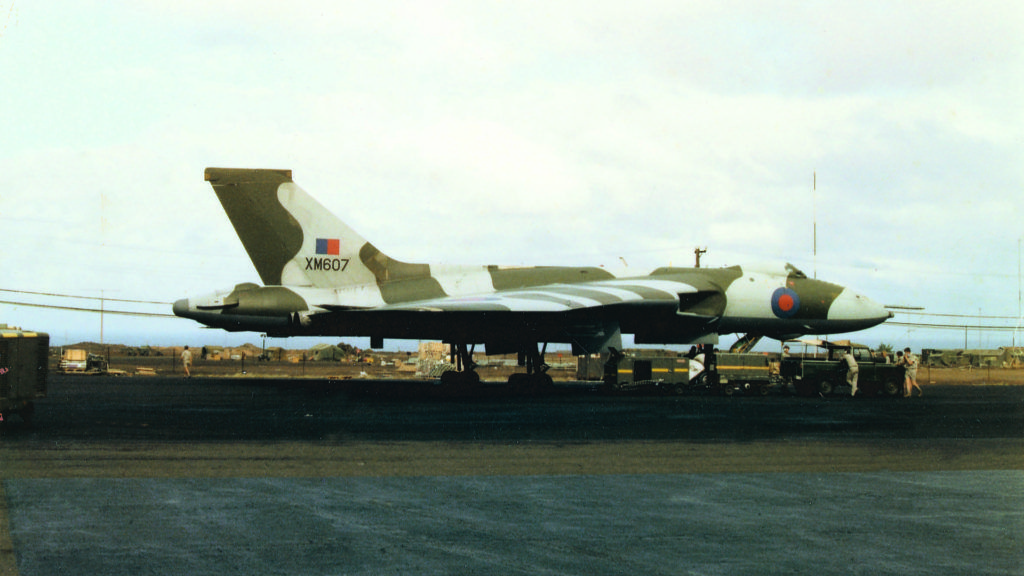 By now the force heading south comprised just two Victors and the single attack Vulcan. Five and a half hours into the mission and some 2,700 miles after take-off, there was a further transfer of fuel. A new problem arose when a violent tropical storm blew up at exactly the point where the final transfer of fuel between the Victors was planned to take place. The turbulent conditions caused the refuelling probe on Flight Lieutenant Steve Biglands’ Victor to snap off in the refuelling basket of Squadron Leader Bob Tuxford’s Victor.

READ >>
Saviour Of Our Skies

With his probe broken, Biglands could take on no more fuel. The only alternative open, if the mission was to continue, was for Tuxford and Biglands to exchange roles: for Tuxford to move in behind Biglands and take back the fuel he had just given, plus sufficient take the Vulcan to Port Stanley. The plan worked and fortunately no damage had been done to Tuxford’s refuelling basket

Now the final pair of aircraft were more than 3,000 miles south of Ascension, with the Vulcan about an hour’s flying time from the target. The two aircraft linked up for the final transfer of fuel from Victor to Vulcan before the target, at a point about 350 miles north-east of Port Stanley. With the transfer complete, the Victor piloted by Tuxford peeled away and headed north. 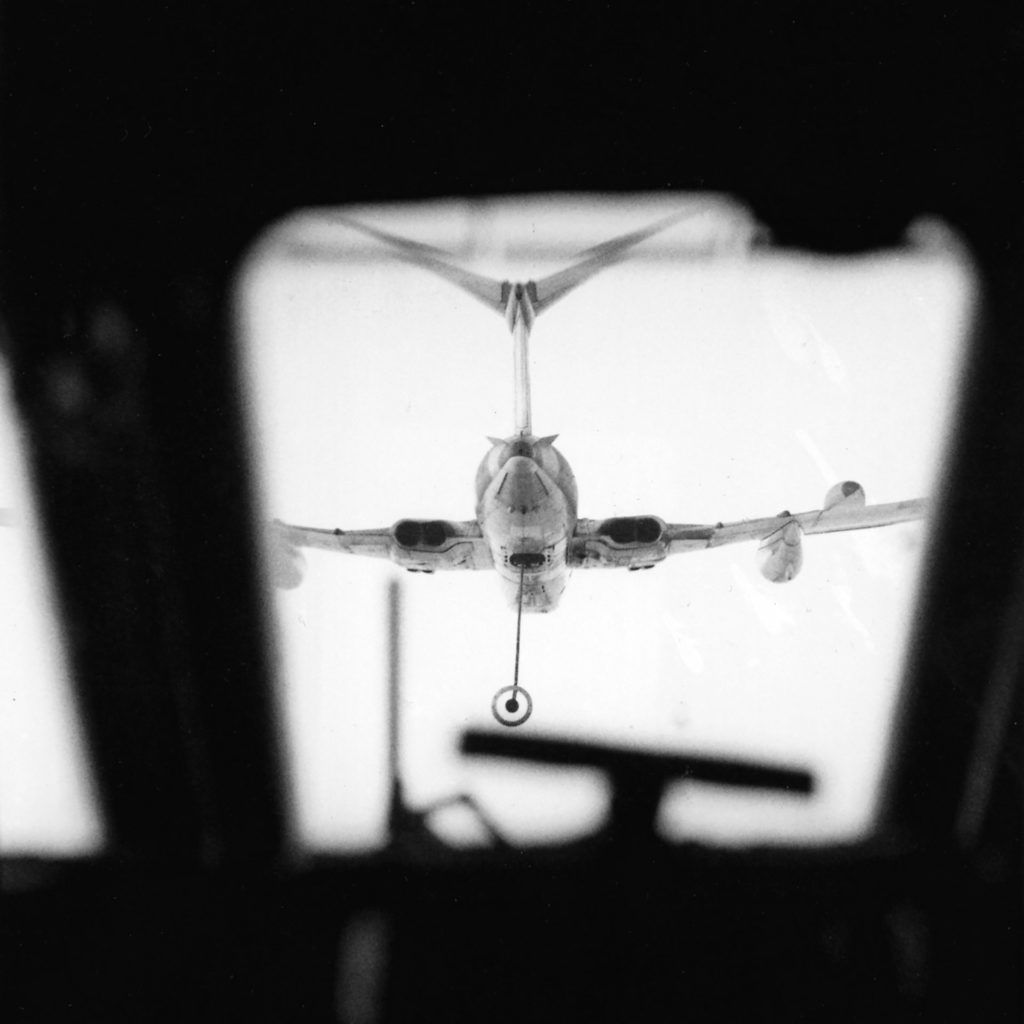 Although the Vulcan was also short of fuel, Martin Withers was secure in the knowledge that one Victor tanker, plus a reserve, were programmed to meet him on his return flight to replenish his tanks. Now he put the problems of the previous hours behind him and made final preparations to deliver the attack.

Shortly after 04.00hrs Port Stanley Time, and 46 miles from the target, it was time for Withers to show his hand. He pushed forward the throttle levers and the four Olympus engines wound up to their maximum thrust. The bomber entered a steep climb then, when he reached 10,000ft, he levelled out for the bombing run letting his speed build up to 400mph. When he reached that speed he eased back on the throttles to avoid exceeding the maximum permissible speed at that altitude. Meanwhile, Flight Lieutenant Bob Wright (radar navigator) had turned on his radar again, and now he controlled the aircraft during its bombing run.

Martin Withers could see nothing of the target; he had merely to follow the left-right steering signals generated by the bomber’s attack computer. In fact a few Argentine defenders had observed the approaching intruder on radar, and were preparing to engage it. Flight Lieutenant Hugh Prior, the air electronics officer, picked up signals from an enemy gun-control radar trying to lock on to the bomber. Prior switched on the appropriate jammer and the enemy signals ceased.

The Vulcan flew across the runway at an angle of 30 degrees, and released its twenty-one 1,000lb bombs in a long line. The first bomb impacted almost exactly in the middle of the runway and blew out a large crater. The rest exploded in a line across the airfield. His primary task complete, Martin Withers pushed forward the throttles and hauled the bomber into a steep climbing turn to get the Vulcan clear of the defended area as quickly as possible.

As the Vulcan completed its turn, and was some fourteen miles away from the target and climbing rapidly, the Port Stanley gun defences came to life. Their noisy display of defiance continued for some minutes, before one by one the weapons fell silent.

Aboard the Vulcan the exertions of the previous eight hours had drained the crew of all emotion. They had no way of knowing it yet, but Bob Wright’s stick of bombs had cut a swathe of destruction running south-west from the centre of the airfield.

His first bomb landed almost in the centre of the runway, penetrated as planned, and then detonated to cause a large crater. The second bomb caused damage to the southern edge of the runway. One of his later bombs landed between the airfield’s only repair hangar and an Argentine Pucara attack aircraft parked nearby, causing severe damage to both.

Now the Vulcan clawed its way back to high altitude, where each pound of fuel burned would carry the bomber twice as far as when the bomber was low down. The second, and in many ways more difficult, part of the mission was that of getting the aircraft safely back to Ascension.

Meanwhile, Hugh Prior prepared to transmit his post-strike signal to the MOD in London and the base at Ascension – ‘superfuse’ – which meant the attack had been successful.

Just over four hours after the attack, the Vulcan reached its planned refuelling point off the coast of Brazil where the crew made radio contact with the approaching Victor tanker. However, there was still one further drama awaiting the crew of the Vulcan. A problem with the refuelling apparatus between the two aircraft meant that as the pressure built up, fuel began to spill from the connection, gushing over the Vulcan’s windscreen. Even with wipers running at high speed the pilots could make out only the blurred outline of the Victor tanker in front.

It took about ten minutes for the Vulcan to collect the fuel it needed. Then the bomber pulled back to break contact. A valve in the tanker shut off the supply of fuel and in an instant the airflow cleared the Vulcan’s windscreen. Suddenly all was sunshine and light in the bomber, and Martin Withers felt as if a huge burden had been lifted from his shoulders.

Martin Withers and his tired crew landed at Wideawake after just over sixteen hours airborne. Bob Tuxford, having taken fuel from a Victor sent south to meet him, had landed there a couple of hours earlier.

There ended one of the longest bombing sorties in history – 16 hours airborne over a distance of some 6,800 miles.