“Compromise is not about losing. It is about deciding that the other person has just as much right to be happy with the end result as you do,” observed author Donna Martini.

In the political sphere, compromise is sadly thin on the ground, yet it remains, thankfully, a vital part of our day-to-day lives.

Take my friend Christopher. An obsessive devotee of all things Japanese – particularly sushi – he has campaigned for us to dine out at his local sushi restaurant for months. However, and I’m ashamed to admit this, I loathe the stuff. Both sashimi –thinly sliced raw meat or fish – and sushi – vinegared rice accompanied by a variety of ingredients, including raw fish – does not float my boat. Many foodies would regard such an admittance as a clear sign of a ‘defunct’ palate, but I find the texture, aroma and flavour of sushi utterly unpleasant. I think it’s the most overrated culinary contribution on the planet. There, I’ve said it.

So what Christopher and I needed was a Japanese compromise. A venue that could satisfy his craving for raw fish, but that also presented an array of options I could sink my teeth into. That restaurant was called Robata. It’s a gem of a place at the heart of Soho that can keep meat fanatics and sashimi fans deliriously happy. It takes its title from the Japanese tradition, started by fisherman, of cooking bits of their catch over charcoal that burned in small stone boxes. The idea soon caught on;  Robata restaurants spread like wildfire across Japan and today there are tens of thousands of them. Head Chef Charles Lee, who has worked in several Michelin starred restaurants during his career before arriving at Robata, has pledged to bring that tradition to our fair city.

However, don’t expect a plush or pampering experience. The service at the Robata restaurant is friendly and casual, rather than formal or obsequious. The space is sparsely decorated –  the room was crowded and noisy during the night we visited. Long communal wooden tables are perfect for larger groups, or you can sit at the counter and watch the action first hand. The menu also doesn’t stand on ceremony. It is broken down into 5 sections where guests are advised to share several dishes between them. Sections include Raws and Sushi, Small Plates, Bao Buns, Robata Skewers, and Robata Large. But please don’t take this as a criticism, because everything that arrived from the kitchen was uniformly delicious.

Christopher, of course, started with yellowtail sashimi and soft-shell crab roll, the former was described as “saline, fishy heaven,” while his tempura crab roll was housed in a sliced roll of sushi and flavoured with yamagobo, which is pickled burdock root. I always know if food has met his expectations. The conversation abruptly ends.

My desires then took centre stage. We ordered the crispy duck salad twice – who could resist that winning combination of shredded duck meat, nestling in a pomelo, grapefruit and pine nut salad, delicately coated in hoisin sauce. The moreish, fatty flavours and textural contrast demanded a second viewing. Next up was miso-infused aubergine and pork pluma; a heady marriage of Spanish pig, spiced with black pepper and gloriously merged with sweet, pickled pear. In deference to my neurosis, raw fish was once again avoided in favour of squid tempura, mercilessly dipped in the rapidly vanishing coriander sauce. Grilled Pork belly skewers put my efforts during Sunday lunch to shame. Imagine the most soft, fatty, sweet morsels of pork, glazed in apple sauce. In comparison, the beef fillet skewers were almost prosaic.

Robata also offers larger plates, but my advice is to eschew those. This restaurant radiates passion and conviviality, on which a formulae of groups of friends and couples sharing a range of small plates depends. Some critics have forecast that small plates dining will die a deserved death, but we saw no evidence of that tonight. The Robata restaurant compromises by providing different flavours, textures and temperatures to suit a variety of palates, but there’s no compromising with the food. 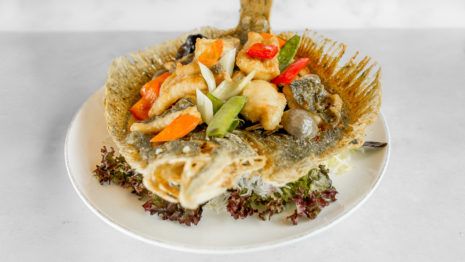 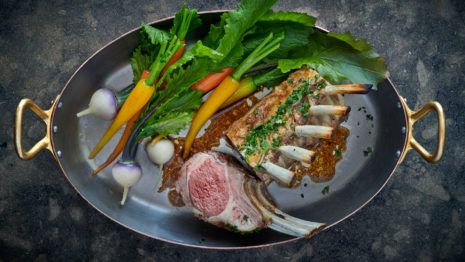 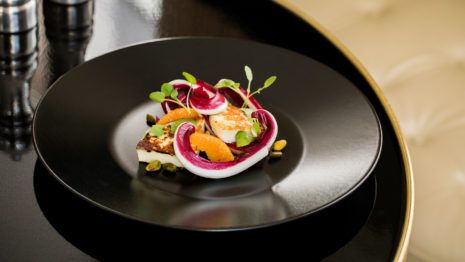