What do you think of when you think of the 1980s? No doubt you think of the bad hair, the dubious fashion and probably a Pete Waterman song or two. As part of Stock, Aitken and Waterman, he became famous for making some of the biggest songs of the 1980s – churning out stars such as Kylie Minogue, Jason Donovan and Rick Astley. Depending on where you stand on this output, he either produced some of the great pop songs of the era, or simply played a key part in setting the stage for Simon Cowell’s empire of bland, homogenised pop stars that we see today.

However, throughout all of this, Pete Waterman has had a not-so-hidden secret: he has been a model train enthusiast since he was a child.

So, just how important were trains to him, growing up in industrial Coventry in the early 1950s?

“I think they were very important,” says Mr Waterman. “I can’t analyse why, but they just fascinated me. I guess there was a comfort in them rattling past your window every morning – that sense of familiarity. I can remember I was roughly two or three and my granddad and I would take a walk to sit and watch the trains go by.”

It was not long before this burgeoning passion for trains was stoked by the arrival of his first model train set, a day that Pete can still recall with crystal clarity: “In about 1951, my dad and granddad went to see Coventry City play Northampton Town just before Christmas, and they came back with a red clockwork train set for me, which I can still see sitting on the living room table now,” the memory bringing a nostalgic grin to his face. “It was one of those circle ones, you just wound it up and it would go round and round. I would have been about four at the time.”

While that train set is long gone, victim of one too many house moves in a lifetime, Pete’s passion for the hobby has never dimmed and despite a career that was all-encompassing, he has always made time for his hobby: “I honestly can’t remember any point in the past 60 years where I have not found time, however busy I am, to play with my models, or build my models, or read about them.

“If you see pictures of the 1980s and you see all three of us, I bet you in most photographs you will see model trains in the background, they were always in the studios, because I had this workbench in my office that meant when I had some free time I could do a bit of modelling.”

So, back to the Stock, Aitken and Waterman days – was Sinitta a secret train obsessive? Did Kylie have a scale model of an Australian trainline in her attic?

As it turns out there was not much trainspotting going on in the studios back then, but that did not stop Pete talking about them. “Everyone was interested because most lads had a train set when they were young and most girls’ dads had a train set – it was always a topic of conversation – so Kylie singing The Locomotion was an obvious one, wasn’t it really!” he says laughing.

Yet, despite his stars’ reluctance, there has always been a strong connection between musicians and model trains. Just in case you do not believe me, here is a quick question for you. What do Rod Stewart, Roger Daltrey and Frank Sinatra have in common? Well, apart from their statuses as music legends and the lead character in many a woman’s daydreams, they all have a passion for model trains.

“So many pop and rock stars have got model railways – and you would be amazed at the kind of people you meet at the shows,” explains Mr Waterman. “Roger Daltrey has been to my house, I managed to see Huey Green’s layout when he was still alive. Phil Collins has got a layout in Switzerland and Frank Sinatra had a wonderful train set.”

So, with all these famous rail modellers around, you would think there would be some competition between them all. Not-so according to Mr Waterman: “No, that’s the great thing about models, there is no competition, everyone has their own version of what they collect and what they are interested in.

“So, Rod Stewart for instance, is very interested in modelling American State Railway, whereas Roger Daltrey models German State Railway and I model 1950s Midlands Great Western. We are all different. While Rod Stewart loves making buildings, I prefer to build wagons and coaches.”

So, now we know Rod Stewart’s real taste in models – you read it here first, folks! 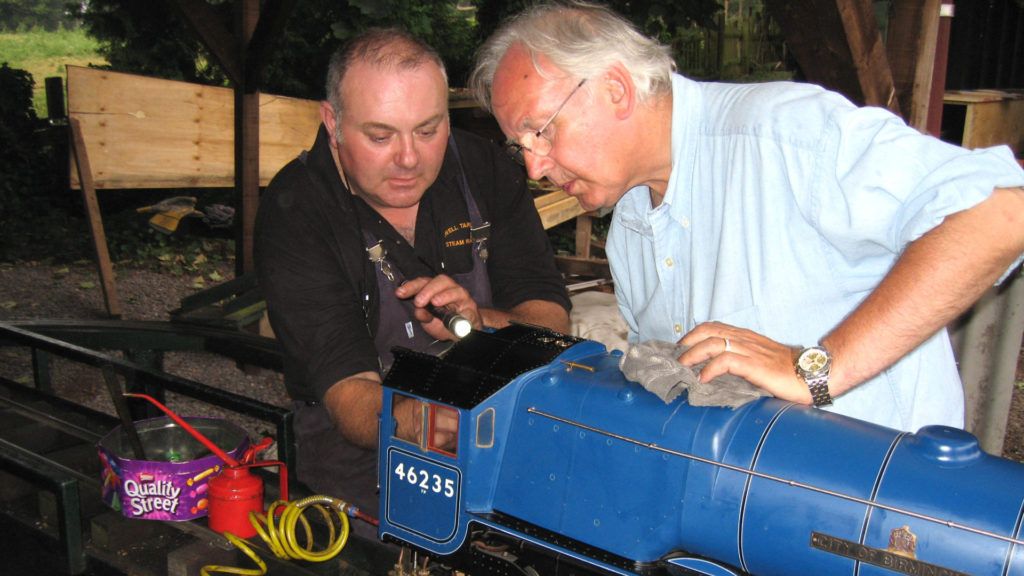 Pete Waterman is no stranger to television, having co-hosted Pop Idol back in 2001 and having fronted his own Ch4 series Trains with Pete Waterman in 2004, does he think there is a space in the market for a Great British Train Off?

“Well, if there is you can forget me as I won’t be going on it!” He says with a laugh. “I’m not certain the Great British File Off would be such a good idea. Solder of the Week? Not sure that’s got quite the same ring to it as I Like Your Donut!

“But seriously, it is a hands-on skill and so to watch it would be like watching paint dry. Doing it is captivating and exciting, but watching it? Probably not.”

So, if you have read this far and have some interest in getting involved with the hobby, what are the main things you might get out of it?

“It is the most self-gratifying thing you could ever do, because you have to use so many skills, you have to use your brain, hands and memory,” explains Mr Waterman, listing off the reasons with such passion you cannot help but be swept along with him. “You have to problem solve all the time, because at the end of the day they are electrical and run by chips and motors, so you have to think when you have problems. You have to be a woodworker, a metalworker, an electrical worker and computer whizz kid. Oh, and you have to be able to draw. It covers so many different things that you can never get bored – it is fantastic.”

Of course, it would be remiss of me to let him leave without asking what gives him more satisfaction: a number one hit record or a perfectly recreated model?

“Oh a number one hit record – it pays the bills!”