Chris Pickering takes the Honda NSX on a journey into its past.

On 13th November 1982 a young Ayrton Senna arrived at the Thruxton circuit in Hampshire where he would drive a Formula 3 car for the first time.  His performance that day secured him a drive with Dick Bennetts’ West Surrey Racing team for the 1983 British F3 season, which opened the door to Formula 1 the year after.

By 1987 he was driving for Lotus. It was there that he struck up a close relationship with Honda, the team’s engine supplier. The top brass from the Japanese company helped to broker Senna’s move to McLaren for the 1988 season, where his first World Championship beckoned. The following spring, with the young Brazilian at the height of his powers, the Honda engineers asked Senna a favour: would he mind doing some testing in their new mid-engined supercar and giving them some feedback?

And that, dear reader, is why we’re currently sat in a car-park at the tip of Cheddar Gorge staring at the glorious burnt-orange NSX from Honda UK’s heritage collection. The plan is to drive the supercar that Senna helped to create back to the circuit in Hampshire where he took that vital step on the road to Formula 1. 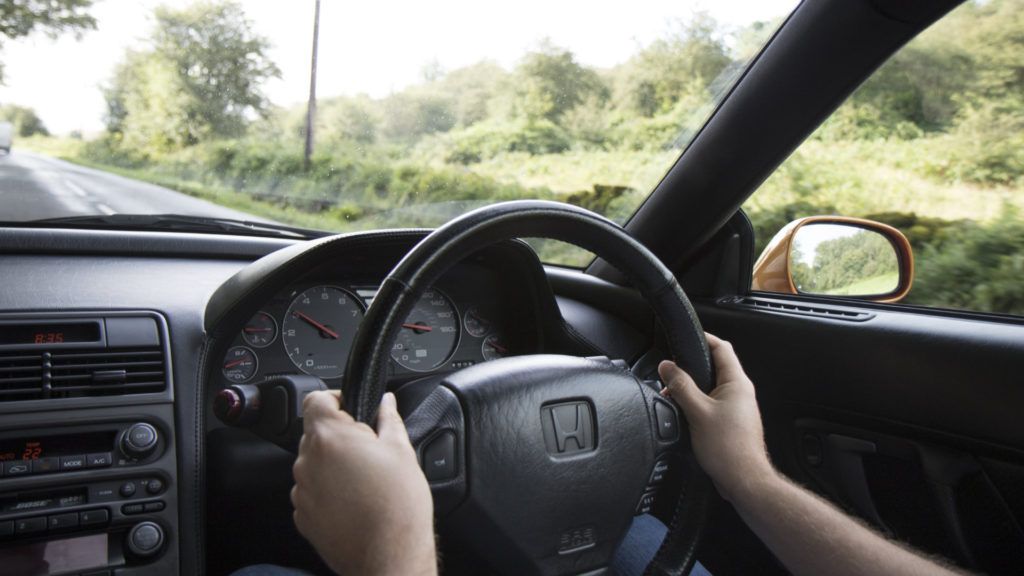 Why Cheddar? Well, despite being overrun by visitors at times and now saddled with a rather draconian speed limit, the B3135 that runs through the gorge is still one of the most dramatic roads in the UK. Get up suitably early and it can be one of the most rewarding to drive too. And we got up very early.

Twist the key and the 3.2-litre V6 fitted to this last-of-the-line ‘NA2’ NSX fires up quietly and obediently. There’s no drawn out high-pitched starter whine, no waiting for the fluids to warm up before you can use second gear; you just get in and drive. Admittedly, a lot of these supercar clichés were already old hat by the time this example rolled off the production line in 2005, but they were very relevant to the world when the NSX’s development began in the mid-1980s. At that point, the highly-strung, hand built machines it was benchmarked against were a world away from the Honda’s user friendly feel.

Contemporary reviews sometimes suggested that the NSX was a little too polished and lacked character as a result. Maybe that was true at the time, but these days it seems to hit a sweet spot in the analogue/digital divide.

At low revs, there’s something strikingly organic about the engine note, which sounds rich and mechanical compared to today’s synthetic soundtracks. Look past the swathes of 1980s plastic on the dash and the view out of the windscreen is suitably evocative too – visibility is excellent but you never lose the sensation of being perched well towards the front wheels in a low and comparatively wide car. That said, one of my few grievances is that the seat itself is set quite high, meaning that there’s precious little room between your legs and the steering wheel. Quite how CALIBRE’s editor – who used to own one of these cars – ever managed to squeeze his 8-foot frame in remains a mystery.[1] 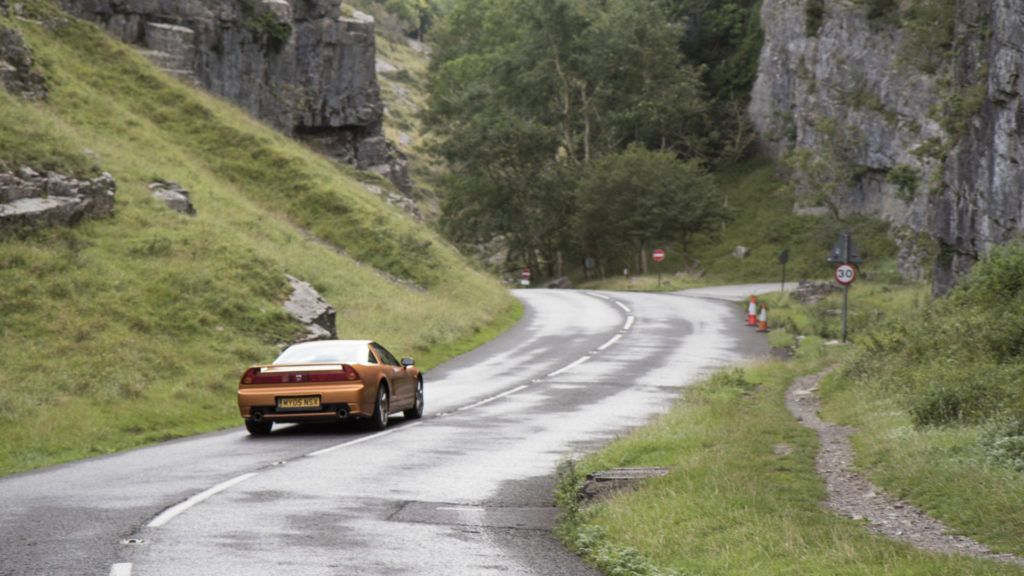 We head up the Gorge on tarmac still damp from the overnight rain, but the NSX finds impressive traction. Admittedly its 276bhp output is quite modest by today’s standards – comfortably less than the current Civic Type R – but it still punches out of the corners with real vigour. It does so with a slight squat of the rear end, tightening its line just enough to cause you to wind off a little lock.

Even in these slippery conditions, the NSX manages to forge an instant and almost-telepathic connection with its driver. Every control input seems to be met with a calm, measured response. The steering, for example, is quite slow in comparison to that of a lot of modern performance cars, but it feels less nervous as a result. Likewise, while the suspension is beautifully damped, it allows a little more body roll than you’d find on the NSX’s modern counterparts, which gives you a bit more information on what the chassis is doing. You do have to lean on the front end quite hard before the electrically-assisted steering telegraphs any meaningful feedback, but that never seems to be an impediment to your progress.

The hairpin bends and jagged limestone cliffs of the gorge soon give way to more open, flowing roads across the Mendip Hills. Here there’s a chance to wring that glorious V6 out to its spine-tingling 8,200rpm red line. Unlike the four-cylinder screamer in the Integra Type R, there is a rich seam of torque the whole way through the rev range, but it still seems to save the best ‘till last, with a frantic zing over the last 1,000rpm or so. The gear shift is a delight too, with the sort of weighty, mechanical throw that encourages you to change gear more often than is strictly necessary. The gearing itself, however, is quite long, even with the later six-speed gearbox. Squeeze every last rpm out of the rev range and you could feasibly cover an entire B-road in second. 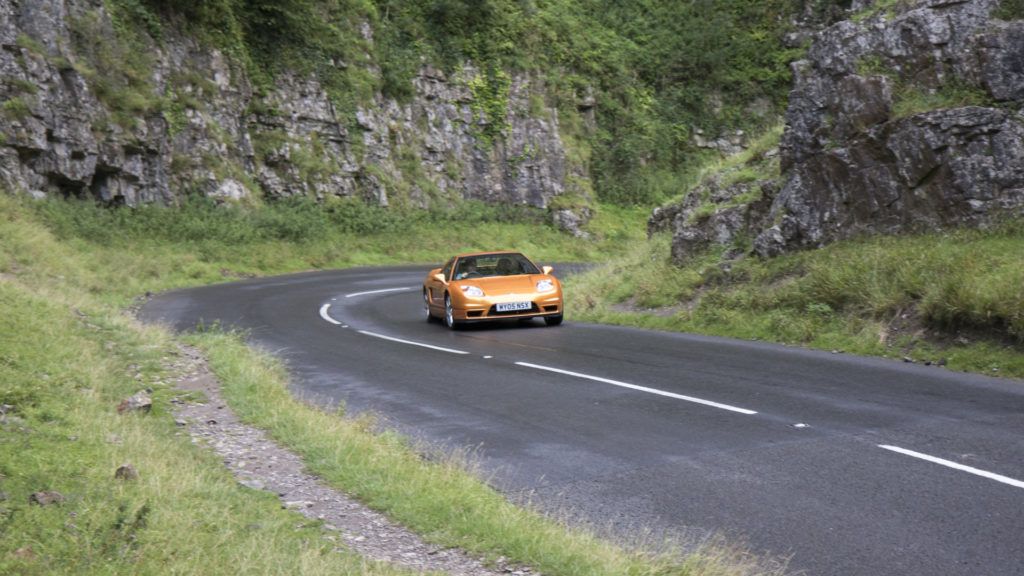 The roads remain relatively quiet as we reach the far side of the Mendips, with the NSX’s mid-range punch allowing us to pick off the early-morning traffic with ease. Not for the first time, I’m struck by the thought that this might just be the ideal level of performance for modern roads; fast enough to excite (especially with that soundtrack) without being too reckless or too conspicuous.

But it’s the NSX’s handling that leaves the greatest impression. With such balance and poise it’s a uniquely confidence-inspiring car to drive quickly, as befits one honed by perhaps the greatest natural talent ever to race in Formula 1. Senna’s original feedback was apparently that the chassis “felt fragile” and lacked stiffness. In a move that utterly sums up the Honda engineers’ attention to detail, they promptly went back to the drawing board and managed to increase the torsional rigidity by an impressive 50 per cent before the car went on sale a few months later. This reputedly gave the NSX the highest structural rigidity of any car on the market at the time – something that you can still feel through the total absence of slack or vagueness in its handling. 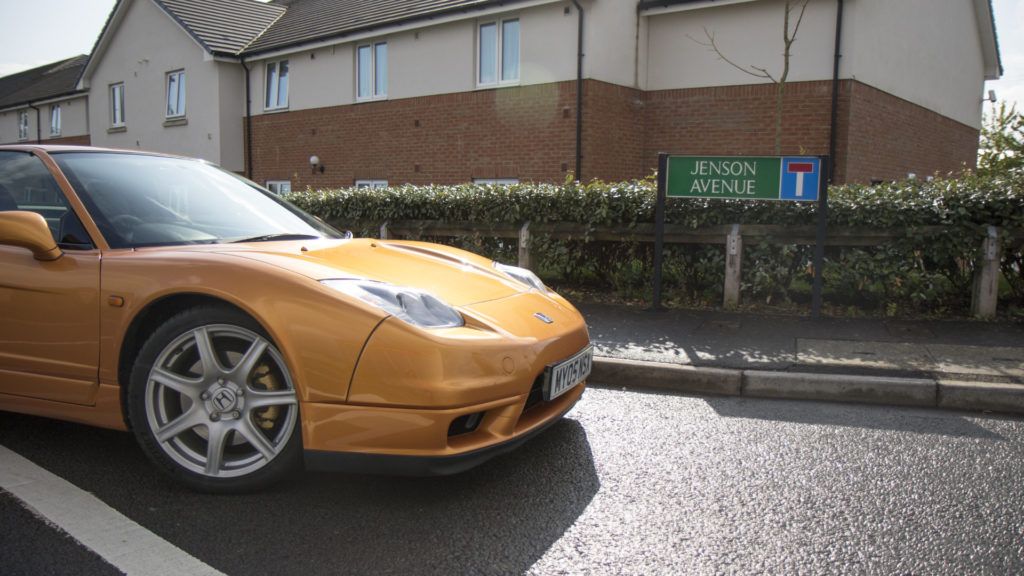 Before we reach Thruxton there’s just time to call in at the birthplace of another motor racing icon. Jenson Button is an official ambassador for Honda and currently races a modern NSX in the Japanese Super GT championship. He’s best known for winning the 2009 Formula 1 drivers’ championship at the wheel of the Brawn BGP 001. Although Mercedes-powered by that point, the car was effectively an evolution of a design that the team had begun developing under the Honda banner the year before.

Frome’s monument to its most famous son is a dead end road on the outskirts of a non-descript industrial estate. Nonetheless we can’t resist hovering for a few minutes to grab a photo. The sight of a bright orange supercar parked haphazardly across the end of the road attracts some understandably quizzical looks from the few people who drive past. 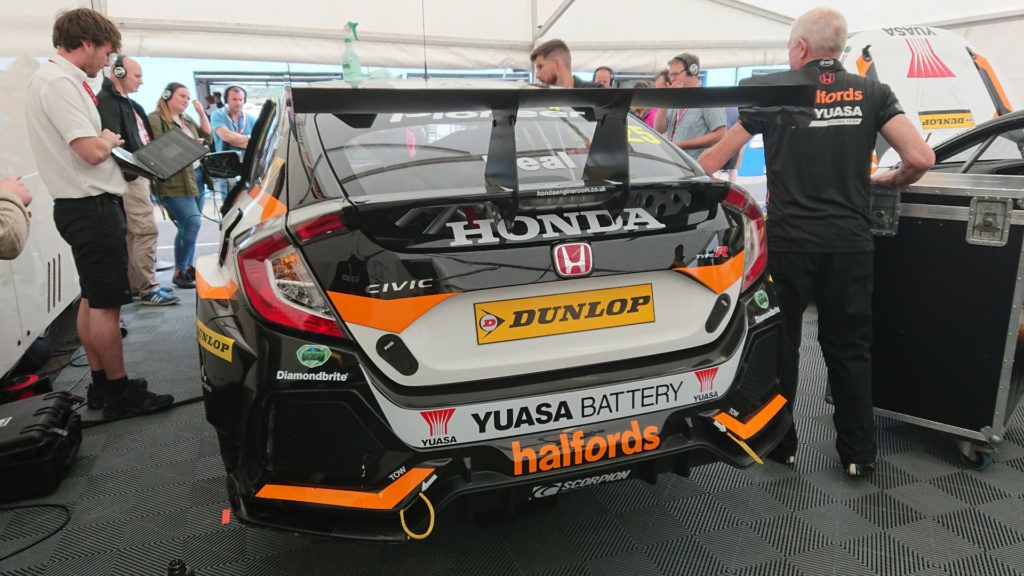 From there it’s a relatively swift blast down the dual carriageways to Thruxton, again revelling in the power delivery and soundtrack of the V6. I don’t doubt that a Ferrari 348 would generate even more goosebumps under the right conditions, but whether you’d actually take it out in the torrential conditions in which we began our journey remains to be seen. I don’t suppose mere mortals such as myself would have felt as comfortable pressing on, either. And despite its usability, the original NSX still has that organic feel that’s missing from a lot of its modern counterparts.

We arrive at the track just in time to watch the first round of the day’s British Touring Car Championship action. Later on, Dan Cammish takes the final win of the day in his Civic Type R. Rounding out the top 10 is Andrew Jordan in his BMW 330i run by West Surrey Racing, with none other than Dick Bennetts still keeping watch from the pit wall. Maybe he’ll discover the next Senna here too.

[1] ed. I replaced the seat-base cushion with a specially imported thinner version. And suffered. It was worth it.