Goodwood is synonymous with horse racing, historic motorsport and a summertime motoring festival but does its reputation for exclusivity and privilege extend beyond its flagship events?  Looking for a birthday weekend away with his wife, Stewart Longhurst decided to find out.

If you’re seeking weekend destinations steeped in automotive culture, the Duke of Richmond’s Goodwood Estate is likely to feature high on most people’s lists.  The motor racing circuit, competitively active from post-war through to the mid-60s, now features twice-yearly classic races, and in recent decades Goodwood House is centre-stage in the mid-summer Festival of Speed hillclimb and car show.  Good wood also has the picturesque South Downs on its doorstep, plus golf courses, horse racing and a luxury hotel. Goodwood has a lot to offer for a short break.

What might put you off, however, is the apparent elitism of Goodwood and its various members’ clubs.  The exclusive Goodwood Road Racing Club (GRRC) for example, will have you hanging-on for several years to join and during that time you will pay for the opportunity of being on the waiting list with a kind of faux-member status called a Fellowship.  Members of the club include the great and the good of motorsport and its wealthy patrons and the club’s house names of Aubigny, Darnley, Methuen and Torbolton reek of stuffy boarding schools and aristocratic privilege. 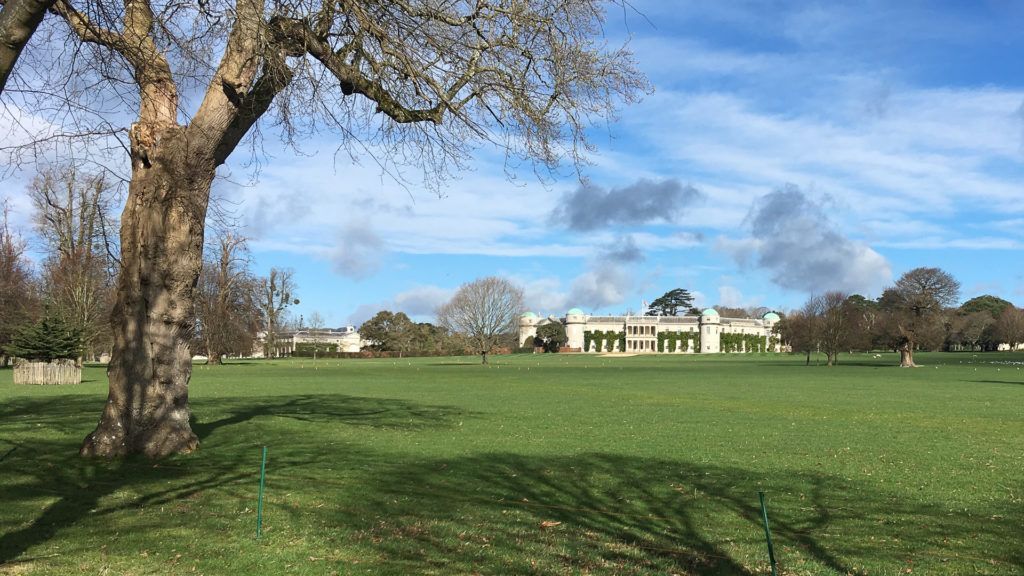 So when I was looking for a weekend getaway around my wife’s birthday and saw the Goodwood Hotel’s bed and breakfast offer advertised on Facebook for as little as £100 a night it came as quite a welcome surprise.  Duly booked – and a kids’ sleepover at the in-laws arranged – we were soon making an early start heading for the south coast.

It was still only late morning as we approached the outskirts of Chichester and, too early to check in, we dropped in at the Goodwood Motor Circuit for a look around.  Having seen it countless times in photos and GRRC video streams (and an episode of Downton Abbey!) it was great to spot the iconic tunnel entrance, pit-lane buildings and race control tower as we drove in.

Across the track from the pits is the old aerodrome control tower which now serves as a reasonably priced cafe and an excellent vantage point to watch the circuit.  Having promised my non-automotive-enthusiast wife when I booked that there were no car events going on, the presence of an orange McLaren 570S and several brightly coloured Lotus Elise and Exige pocket rockets in the pit lane suggested otherwise. Luckily, it was just a track day and despite initial concerns it actually provided some great visual and auditory entertainment whilst we had lunch on what was an otherwise grey day. 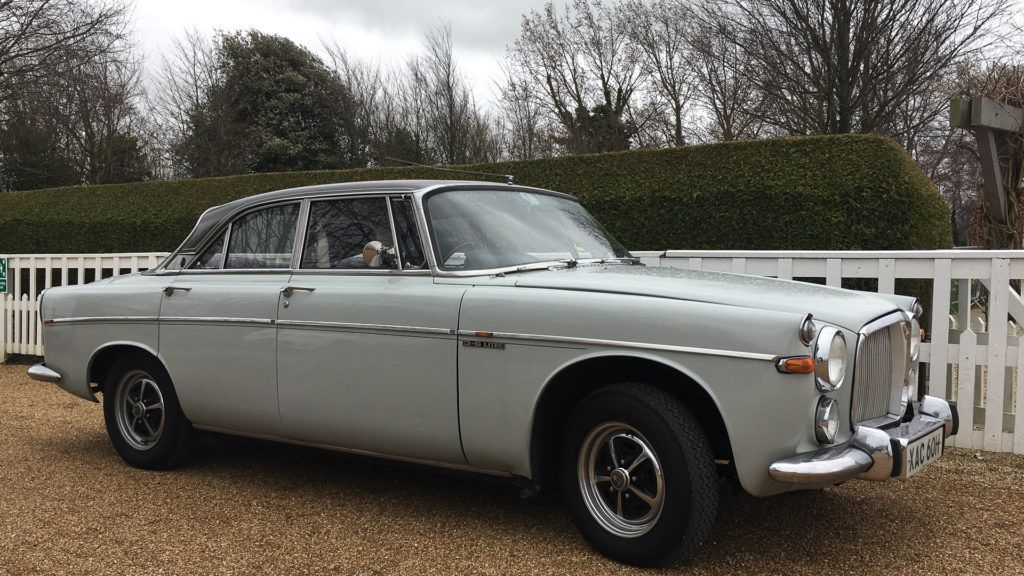 Also parked up by the cafe was a majestic Rover P5b Coupe which we both thought matched the retro feel of the place better than the modern sportscars. A quick check online and I realised it was the same age as me…

Suddenly feeling in need of some rejuvenation we decided to walk around the circuit’s perimeter. With the track nearing two-and-a-half miles in length, the perimeter walk must have been closer to three and we were treated to the full selection of mid-March weather on our way around.  As motor circuits, and the airfields that many are based on, tend to be very exposed places there wasn’t much in the way of shelter from the fresh onshore winds and rain that rolled in after we’d set off but it was a good way to see the different parts of the track and the aerodrome.  Between the St Mary’s and Fordwater turns we spotted a Spitfire of the Boultbee Academy, sporting D-Day markings, braving the wind outside their hangar across the in-field.  At Madgewick Corner (we’d walked the “wrong way” round) we stopped for a while to watch the BMW M140s of the “spin and slide” experience taking turns on the skid pan, clearly having a great time.

The hotel car-park is only a few minutes’ drive on from the circuit and is located in what looked to have once been a stable-yard or walled garden to the house. In keeping with my elitism prejudice, I was expecting a display of premium branded SUVs and prestige sports cars but it was no different to what you might see at a commuter railway station car park. Yes the cars were mostly modern and smart looking but I didn’t in any way feel out of place in the Volvo family saloon.  I did spot a polished silver E-type tucked away near the Waterbeach Spa entrance but otherwise most cars were unremarkable.

Inside, the reception and check-in area was more reminiscent of a National Trust property than a hotel, with leather sofas either side of a crackling log fire and although the staff did have a corporate uniform, it was a more relaxed Country Life than formal Savile Row.  The staff were very welcoming and helpful with advice on local walks and things to do and once the check in process was complete they began to lead the way to our room.  The last time I had this “show you to your room” service, I was on a business trip in Asia and it ended in a rather awkward moment where I had to try and explain to an increasingly disappointed bell boy that I had no local currency to offer a tip.  In this case, however, it soon became clear that the reason they do this is that you are likely to lose your way without a guide through the different buildings and connecting corridors that make up the hotel and leisure facilities.

The room was very comfortable and furnished in an unfussy classic style with a wooden bed and leather club chairs by the window where you could sit and flick through the engaging in-house Goodwood magazine or gaze out across the garden.

There are a number of dining options for guests at the Goodwood Hotel, from the informal Bar & Grill and the estate-sourced “Farmer, Butcher, Chef” restaurant, both at the hotel, to the fine-dining experience of the Kennels clubhouse a few minutes up the road.  We’d pre-booked a table at the Bar & Grill which has a spacious and bright feel but decided instead to eat a nearby gastro-pub, The Fox Goes Free, which offered a more cosy dining atmosphere on what was quite a chilly day. The inclusive full English breakfast in the Bar & Grill the next morning was, however, superb and the open feel of the place was much better suited to a daytime meal.

Guests of the hotel get full access to the leisure centre with pool, sauna and gym and can also book into the Waterbeach Spa for treatments.  This access even applies even before you check into your room and after you’ve checked out the following day.  Additionally, you can visit the Kennels, book a round of golf and wander almost everywhere on the 11,000 or so acre estate. 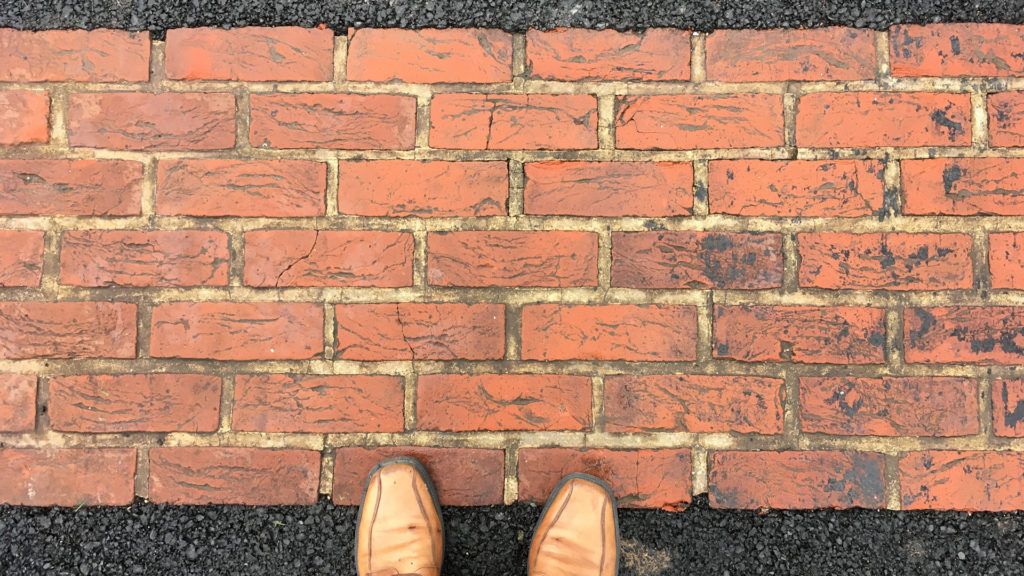 Keen to see more of the grounds, we set off for a walk up the drive towards Goodwood House.  One of the first things you come across is the “Yard of Bricks” from the Indianapolis Motor Speedway; laid in 2011 to commemorate the centenary of the Indy 500 race.  Although not quite a yard across – more like two feet – these genuine Indy bricks mark the start line of the Goodwood hill climb course.  A little further on and the house comes into view through the trees that line the avenue.  Having been to the Festival of Speed (FoS) a few times, it was strange to see the house and immediate surroundings devoid of the hay bales, grandstands, hospitality marquees, huge manufacturer stands, and the crowds of people that you see at the 4-day event.  Oddly the showground felt much smaller when empty; perhaps because we could cover distance more quickly when we had the space to ourselves.

Taking the road to the left of the house brought us out at the second golf course by the Kennels clubhouse and the start of a private bridleway that tracked the public road up the hill to the race course.  There are circular walks suggested by the hotel which take you elsewhere on the estate but we found this up and back route to the home of Glorious Goodwood a pleasing option.  Sadly, we couldn’t walk the FoS hill climb course as the road beyond Molecomb corner was off limits due to the Duchess being in residence further up.

1950s British racing driver Roy Salvadori famously said “Give me Goodwood on a summer’s day and you can keep the rest”.  No doubt there was great merit in this because we had a great time at Goodwood even on a rather cold and damp weekend in March.  Look out for special offers at The Goodwood Hotel; it’s great value, has much to see and do – and isn’t so elitist after all.