A circumnavigation of Iceland is the best way to understand its rich and detailed mythological history, says Richard Tarrant

It is said that Icelanders do not talk, that they tell each other stories, continuing a grand tradition dating back to the extraordinary sagas of the 13th century and beyond. Recounted at fireside gatherings in the roundhouses of the earliest Viking settlers such tales lent a reassuring layer of meaning to the country’s bizarre and spectacular landscapes – landscapes shaped by the most extreme of natural forces. Authors, poets, travellers and other, non-native storytellers have swelled Iceland’s ranks in recent centuries and, today, whenever film and television directors seek to tell their own stories of the fantastical, they invariably come here. Among myriad star turns, Iceland has portrayed a snow planet in Star Wars: The Force Awakens, the world beyond the wall in Game of Thrones and the epitome of wish fulfilment in The Secret Life of Walter Mitty. To visit this northern wonderland is to invite a recalibration of one’s own imagination.

I undertook a circumnavigation aboard the sleek MS Ocean Diamond, operated by Iceland Pro Cruises. This ice-class, expedition-style vessel plies the frigid waters of Antarctica during the winter and the bewitching fjord-indented coastlines of Iceland and Greenland in summer and spring. Carrying a maximum of just 224 passengers, this is no ‘floating city’ with spas and steakhouses, kids’ clubs and Broadway-style shows. Most of the fairly spacious cabins have a functional, no-nonsense feel to them. There is one dining option, dishing up local and international cuisine (more hearty than refined), a small theatre used almost exclusively for port talks and lectures, and a couple of comfortable lounges with tea and coffee stations. That is about it.

But if MS Ocean Diamond is a ‘rough diamond’ in some ways, in others it genuinely excels. The service is flawless, the bridge is always open, and most importantly the destination is placed squarely at the heart of the cruise experience, both in terms of accessibility to the charming smaller ports and in an expedition team of enthusiastic and experts. As well as delivering bilingual lectures, these local specialists accompany the majority of excursions, bringing to life the culture and the sagas, the wildlife and the geology. If you visit Iceland only once, these are the people you would want to show you around.

It becomes quickly obvious that theirs is an Iceland packed with unique experiences and fascinating stories. Our first day tour (from Stykkisholmur in the western region of Iceland) took in the majestic Snæfellsnes peninsula, often called ‘Iceland in a nutshell’ due to its variety of landscapes. Conical mountains ringed with tonsures of cloud, serene beaches with paddling sheep and plains studded with millions of razor-sharp denticulations of lava – this was fertile ground for numerous sagas – epic tales blending fact and fantasy that many scholars consider among the greatest achievements of medieval literature: tales of the likes of the half-ogre Bárður, a guardian of the local people, and the wily Snorri, who rid the region of bloodthirsty berserkers.

Latterly Snæfellsjökull, the glacier-topped stratovolcano at the peninsula’s heart, also found fame as the embarkation point for the Journey to the Centre of Earth in Jules Verne’s 1864 sci-fi classic. Untouched by industrialisation – indeed, barely even brushed by civilisation – Snæfellsnes plays a neat temporal trick. Iceland may be Europe’s newest landmass in geological terms, but here it appears most ancient and timeless, offering a privileged glimpse of how Gaia might have looked in her infancy.

At the Bjarnarhöfn Shark Museum, a pretty farmstead on the western peninsula’s north coast, the adventurous and foolhardy may try kæstur hákarl, Iceland’s notoriously disgusting national dish of fermented shark. If you consider sampling local delicacies an essential aspect of travel, you will not want to miss this singular taste… but steel yourself. Untreated, the meat is toxic. The small kidneys of the Greenland shark means its flesh has high urea content – even after months of fermenting and drying, a strong smell of ammonia persists. The more you chew, the more punishing the olfactory assault, so bite and swallow quickly, then wash it down with a triumphant shot of the local aquavit, Brennivín.

Isafjördur was our next stop. Gateway to the dramatic Westfjords region and the iconic seven-tiered waterfall, Dynjandi, a scramble up the rocks here richly rewards the adventurous with a glimpse of the pretty opal tresses of its uppermost cascade.

Then to Siglufjörður, centre of the lucrative herring industry for more than half a century until overfishing depleted stocks. Siglo is now home to the surprisingly engaging Herring Era Museum, but the town will be more familiar to BBC4 viewers as the claustrophobic location for Trapped, Iceland’s accomplished contribution to Nordic Noir.

Day five’s port stop was Akureyri, capital of the north, inviting appreciation of the horseshoe Godafoss falls, picturesque Lake Myvatn, and the ‘dark castles’ of Dimmuborgir – peculiar lava formations reputedly marking the location where Satan landed after being cast out of Heaven. Home to all manner of supernatural beings, including the thirteen mischievous Yule Lads and their mother, the homicidal 800-year-old troll Grýla, it is only in Iceland that such a dark Christmas tradition could have arisen – an alternative Santa Claus who not only monitors children’s behaviour, but eats the naughty ones.

A difficult decision awaits on day six of the cruise. Set on a bay fed with nutrient rich sediment from two glacial rivers, the delightful port of Húsavík is the acclaimed whale watching capital of Europe, with some fifteen species of marine giant known to frequent its waters. Excursions here have a sightings success rate close to 100%.

Húsavík is also the base for a full day excursion, which takes in Dettifoss, the continent’s most powerful waterfall. Every second more than 40,000 gallons of water roil, churn and crash 145ft downwards, kicking up clouds of rainbow tinged spray. This tour also takes in geothermal Hverir, with its porcelain-cracked earth, bubbling mud-pools and steaming fumaroles, and tranquil Asbyrgi, a 4km-long semi-circular canyon in the basalt rock, with a very pleasant forest walk at the broadest part. Geologists have long disputed the forces behind its formation but, as you would expect, Iceland’s storytellers have their own explanation – Odin, king of the Norse gods, was riding his eight-legged stallion, Sleipnir, among the Northern Lights one evening. He flew without care, and the canyon at Asbyrgi is the mighty imprint of one accidental hoof upon the land.

Remarkably, we were invited to enjoy Odin’s playground for ourselves that night – as if envious of earthly marvels, the Northern Lights performed their celestial dance in the small hours. We got the cabin call to head out on deck and were greeted with a great painterly stroke of green light arcing and flexing across a canvas of stars.

After a relatively sedate seventh day in Seyðisfjörður on the eastern side of Iceland we undertook a snowmobiling excursion on Europe’s largest glacier. From Djúpivogur, it is a couple of hours’ drive to Vatnajökull, the Corsica-sized ice field that dominates the southeast of the island and supplies the roaring waters of Dettifoss. Here, you can don waterproof overalls and skidoo across the glacier surface. Here, however, we timed it rather badly, heading out into the very first snowfall of the season, though the almost total whiteout lent an extra frisson of excitement to the adventure.

Our most memorable adventure was reserved for the final day: golf in a volcano! Vestmannaeyjar Golf Club, on the island of Heimaey, is set entirely within an extinct caldera. With swirling wind and over-water tee shots, this course presents both a stern test of golf and the yet greater challenge of keeping your mind on the game when virtually every hole frames a remarkable vista. To one side: ancient lava cliffs home to nesting puffins, set captivatingly against the azure sea. And to the other: high slopes of red-brown rock, which did not even exist until an eruption in 1973.

So, on this island at least, I am literally as old as the hills. The lava from this eruption covered hundreds of houses and garnered the nickname ‘the Pompeii of the North’, yet remarkably everyone survived.

Finally back to Reykjavík, and it was time to conclude this most amazing of journeys – but, perhaps not just yet. Book a two-night extension in this vibrant capital, and Iceland has a readymade encore for you. The Golden Circle may be the island’s most beaten path, but it is no less impressive for that – a final trinity of magnificent natural phenomena. A couple of hours’ drive across glacier-flattened plains and through fairytale mountains is Gulfoss (Golden Falls), another of Iceland’s mightiest cataracts, where the Hvítá river plummets down 32m over two steps and into the heart of a rugged canyon.

Next on the itinerary was UNESCO World Heritage Site Ϸingvellir (anglicised as Thingvellir), the only place on earth where the boundary of tectonic plates may be observed: North America and Eurasia, drifting apart at a speed of 2cm every year. In this auspicious place was built the 10th century Althing meeting hall of Viking chieftains, an institution which lives on today as the Icelandic Parliament, and Ϸingvellir is also renowned for its ‘hidden folk’ (elves), whose tiny wooden houses grace many a local garden (a 2007 University of Iceland survey found that a remarkable 62% of the country’s population consider the existence of such huldufólk a possibility). And at Geysir, the geothermal field whose name would come to define all of the world’s spouting springs, the visitor can walk an enchanting landscape of simmering pools, steaming vents and towering ejections of scalding water. Whilst you would be extraordinarily lucky to witness one of Great Geysir’s infrequent 50m jets, the smaller Strokkur geyser gaily spouts 10-20m every few minutes, enrapturing its spectators.

In short, if you have never visited Iceland before, you need to do it. And that is me drawing a line in the country’s beautiful, black volcanic sand. As to how, a circumnavigation aboard MS Ocean Diamond must be just about the most comfortable and insightful way to tour this breathtaking, storied land. As to when, go for high-summer midnight sun. There were some gloriously sunny days during this cruise in late August, but seasonal change was already under way: the aurora, the first snows on Vatnajökull, the departure of the tardiest puffins and the loss of some ten minutes of daylight every 24 hours. Such harbingers can mean only one thing, as Game of Thrones viewers in particular will appreciate. Winter is coming. 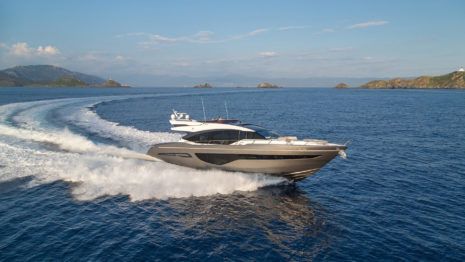 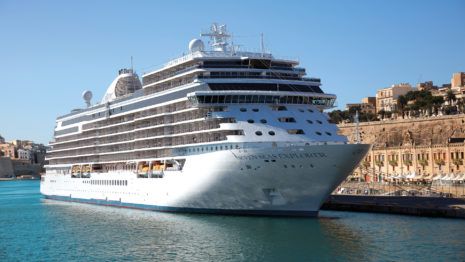 Into The Blue: The Rib Club